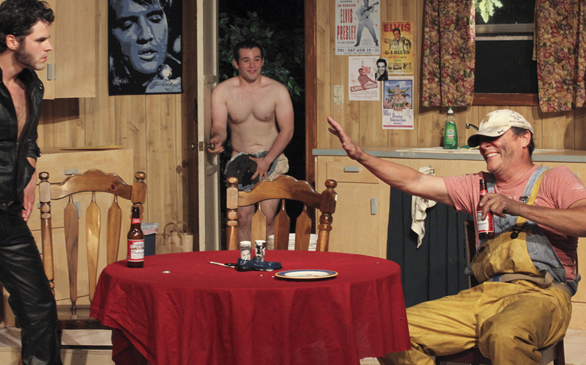 Somewhere in Appalachia, a shabby little trailer is filled with Elvis Presley memorabilia, a never-ending six-pack of beer and an incredibly funny yet highly dysfunctional family. That’s all director Karen Landry needs to bring to life playwright and star Robert Mollohan’s “Jesse Boy.”

The story – like the Appalachian characters – is far from simple. The play explores family, love, ego and a plethora of other very subtle defects of the human character. “Jesse Boy,” to say the least, is an enthralling, multifaceted journey into the lives of a Southern family who lets obsessions with any chance of salvation and the King of Rock ’n’ Roll deal devastating after devastating blow to the well-being of the clan.

It is under Richy’s vision that his beautiful wife Abigayle, played by Jaimi Paige, and her mentally disabled little brother Jesse Boy (Zach Book) are thrown into a quest to win a one-year residency at the local mall as an Elvis impersonator. The catch (because there always is one when entering Elvis contests) is that the cost of entering the contest is $1,000, which the family doesn’t have – just yet. The cast becomes more colorful when joined by the delightful town drunk Red, played by Chris Mulkey, and an old co-worker/friend of Abigayle’s, the local stripper Mary-Lou, played by Kathleen Nicole Parker.

“Jesse Boy” makes the most of the actors who portray a cast of characters so rich they leave you feeling as if you really got to know each one. Mollohan as Richy can be hilarious and then in an instant frighteningly vicious. It’s no wonder this play is able to draw such a strong reaction from its audience, who at times is roaring with laughter, looking on with disdain or in a stupor of contemplation. The range of emotion, revelation and rage that drives the play is hard to forge.

“Jesse Boy” is an astonishing, wild and eventful story that is delivered beautifully through a consistent, passionate kind of storytelling.