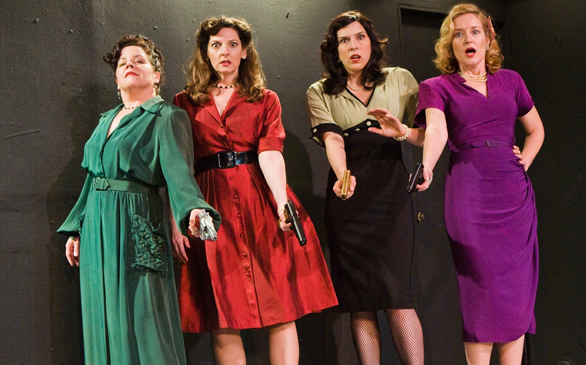 “L.A. Noir UNSCRIPTED” takes improvisational theater to a whole new level. A troop of seven actors (three women and four men) do extensive research on a specific genre, in this case film noir – “some say it starts with John Huston’s The Maltese Falcon (1941) and ends with Orson Welles’ Touch of Evil (1958).” A big part of the research includes watching films like Kiss Me Deadly, Murder, My Sweet and The Big Knife, as well as reading novels and stories by Horace McCoy, Cornell Woolrich and Raymond Chandler to explore the “cynicism and romanticism, convention vs. nonconformity and free will vs. fate” continually seen in these works. And then, they make hilarious theater incorporating what they’ve learned!

Not to mention the actors must mimic the mannerisms and one-liners – and it doesn’t end there. The lighting and music are also improvised throughout the show.

Each actor enters one by one to the front of the stage in costumes and makeup of the genre. They stand in a straight line, side by side, facing the audience and ask them to name a place in Los Angeles and an object. This particular night the audience chose Echo Park and a stapler, and from that point, a story is born.

Two detectives, a movie star, a dress with an address stapled to the inside, the lady with the dancing Chihuahuas and a dead Bobby in a span of an hour and a half. Here’s the catch: Every night is totally different. Prior to coming on stage, the actors have not decided what characters they are playing.

This innovative troupe creates magnificent and intriguing theater. The actors are so sharp in their dialogue and expressions. You don’t know where the story will go, what turns it will make, what more genius will come out of the actors mouth. They keep you on the edge of your seat, laughing so hard, wanting more. Clearly, they have done their homework and then some.

I can’t wait to see it again!