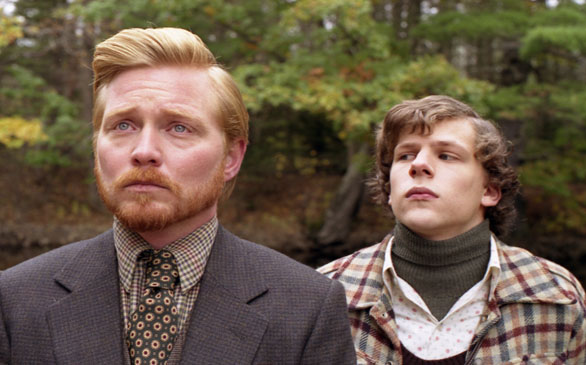 You’ve heard the saying, “Live like you were dying.” The phrase proves especially appropriate in The Living Wake’s case. If a doctor told you that you were going to die soon, how would you spend your time awaiting the final hour?

The Living Wake is quite a peculiar film. K. Roth Binew (Mike O’Connell) plans his own wake before he even dies and chooses an out-of-the-ordinary way to greet death. With his loyal friend Mills Joaquin (Jesse Eisenberg) to assist, Binew dedicates his last day to invite both strangers and family alike to celebrate at his wake.

This film tells the story of a man’s final day on earth, but what’s odd is that he’s not pining over his life or regrets. He’s celebrating by handing out invites for this marvelous event. The humor is prevalent as Mills documents all the insane details of Binew’s final day.

The language, the acting, the singing – they’re all overwhelmingly strange but downright hilarious. Just when you think the film has reached its limit of absurdity, Binew breaks out in song and the craziness proceeds to heighten.

It’s safe to say the plot of this film is unlike any you’ve ever seen before or might hereafter. The creative actors paired with an outrageous script really provide a memorable experience.

O’Connell exhibits a twisted brilliance. He’s impeccably odd and unique in this role. His comedic timing and unusual character assure that he is forever etched in your mind.

Eisenberg’s character, though just as crazy as the film itself, is adorable. He always finds a way to capture an astonishing lovability in his films.

The film’s ridiculous nature and utter randomness are certain to shock you scene after scene.

The Living Wake releases in select theaters May 21.