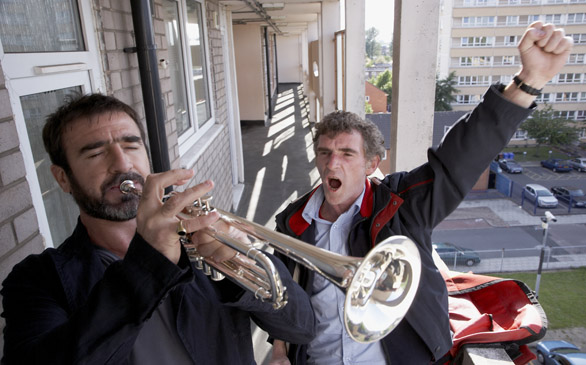 An encounter with an ex is enough to drive anyone mad, and Eric is no exception. After Eric Bishop (Steve Evets) runs into his ex-wife Lily (Stephanie Bishop), whom he abandoned years ago, his world takes a severe turn. Bishop’s madness forces him to seek the Eric within.

With a little help from his friends, Bishop decides to look to soccer sensation Eric Cantona, his childhood hero. Cantona himself appears in the film as Bishop’s hallucinated mentor.

This entrancing story makes you realize there’s a little crazy in everyone. The film addresses the sensitive subject of a man’s horrific nervous breakdown in a way that is both heartbreaking and uplifting.

The film also gives an unconventional look at family life. After his second marriage fails, Eric is left to raise his two stepsons on his own after abandoning his biological daughter years ago.

Evets creates a perfectly relatable character that is trampled on by friends and family. He is endearing and makes superior acting choices. Stephanie Bishop also shines with her warm charisma.

It’s a relief Cantona agreed to make this film, because without him it wouldn’t have been possible. Perhaps they could’ve centered the film on another athlete or iconic figure, but it wouldn’t have worked as nicely as this piece does. Because the plot and characters here work so perfectly hand in hand, it’s impossible to imagine it any other way.

For the film’s authenticity and overall benefit, Looking for Eric was shot entirely on location in Manchester, U.K.

Ken Loach directed the screenplay written by Paul Laverty. Loach’s past work includes Riff-Raff, The Wind That Shakes the Barley, My Name Is Joe and Sweet Sixteen.

For Loach, this film is “about friendship and about coming to terms with who you are. We’re stronger as a gang than we are on our own. Although that seems an almost trite observation, it hasn’t been the spirit of the age for the last 30 years, where people are your competitors, not your comrades.”

Sometimes a second chance is all a man truly needs.

Looking for Eric releases in theaters May 21.