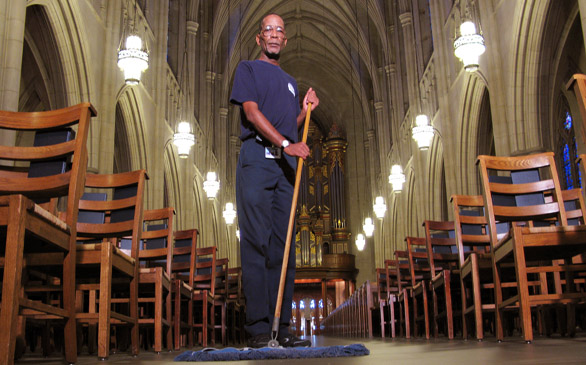 Janitors are often the unseen backbone of any civilized society. They clean up what others leave behind and do the little things that make life livable but that no one else wants to do. We usually take the work they do for granted and sometimes find it awkward talking to them like normal human beings.

But the reality is that custodians are people just like you and me, and in his film, The Philosopher Kings, director Patrick Shen aims to change the usual preconceived notions. The film follows eight janitors from major universities through some of their daily trials, and explores both how each person got to where he (or she!) is and what each wants to do in the future.

It shows some really touching stories, from Corby Baker, a janitor at Cornish College of the Arts who aspires to be an artist himself, to the one-armed Caltech custodian (the victim of a car crash) who considers himself lucky on days when he doesn’t have to change a trash bag.

There’s also Oscar Dantzler, who works in the chapel at Duke University and found a second family in the students and faculty at Duke, and Gary Napieracz from Cornell who has arguably led the most interesting and varied life ever. The most touching story, though, is probably that of Josue Lajeunesse, a [legal] Haitian immigrant who holds down two jobs in order to support his own wife and children and his brother’s widowed wife and children, and saves some up on the side to spearhead a charity that brings clean water to poor regions of Haiti.

The film can be a thought-provoking tale of humanity and in places, that shows that wisdom can come from unlikely sources if we’re just willing to listen, and that just maybe the most interesting stories might come from the people you see (and probably disregard) everyday.

But when it comes down to it, the film aspired to something that it could never accomplish by looking at so many subjects in just over an hour. It tries to tackle some (read: more than one) of the biggest philosophical questions about love, life and happiness, while also following multiple timelines. All of this ends up producing a film that feels disjointed and incomplete.

The Philosopher Kings releases in select theaters May 21.