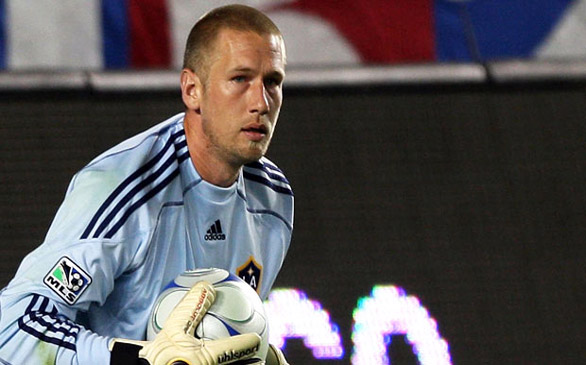 The Los Angeles Galaxy continued their hot streak, as they managed a scoreless draw May 15 against the visiting Toronto FC at the Home Depot Center before a crowd of 20,007.

“They [Toronto FC] made it difficult on us,” says defender Todd Dunivant.

Los Angeles moved to 7-0-2 with a total of 23 points for the season; they remain atop of the Western Conference and with the best team record in the MLS.

Goalkeeper Donovan Ricketts received the night off and Josh Saunders was called upon, and he did not disappoint. Saunders looked solid defending the net, especially in the ninth minute. Forward Chad Barrett fired a 17-yard right-footed shot, but Saunders made the impressive save en route to his first shutout of this campaign.

“Chad [Barrett] had the ball on a good run, and he played it across,” De Rosario stated. “It was a little bit behind me and I tried to get around it, but unfortunately, I missed wide of the net.”

For the Galaxy, Landon Donovan had the most dangerous scoring chance, coming at the fourth minute of play. Defender Bryan Jordan sent a cross into the box, where Donovan connected on a potent kick that went inches high of the goal net’s crossbar.

Then, in the 73rd minute, striker Edson Buddle fired a low right-footed shot, but Toronto FC’s goalkeeper made the stop in diving fashion.

Donovan and Buddle are no longer with the club for some time, as both players have been invited to the preliminary 30-man roster at the camp of the United States team in Princeton, N.J.

Los Angeles plays at Dallas FC Thursday at 5:30 p.m. before hosting an international friendly against Argentine Boca Juniors at the Home Depot Center Sunday at 5 p.m.