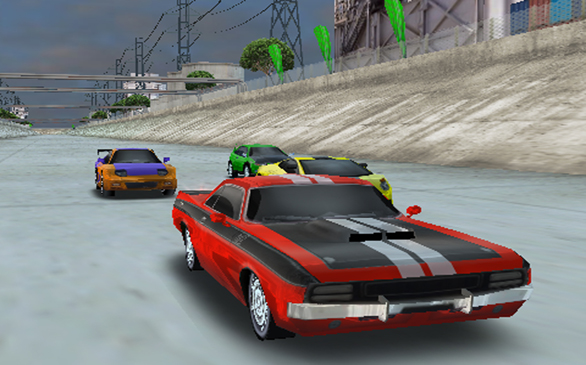 For anyone who has seen Avatar or pretty much any children’s movie in the last year, it’s obvious that the entertainment industry is all about 3-D. Gone are the red-and-blue glasses, and in their place are 3-D televisions and monitors with matching 3-D glasses. Nintendo has even announced that their next portable gaming device includes games that “can be enjoyed with 3-D effects without the need for any special glasses.”

3-D gaming may be the wave of the future, but there is a wealth of history behind it. From the Sega Master System’s massive 3-D glasses to the ill-fated Virtual Boy, there have been interesting and awkward attempts at moving into the next dimension, but some of the most memorable 3-D gaming was actually done on 2-D screens. If you want a quick 3-D fix, here’s a pair of cool new games that you can take with you.

The first steps into the realm of 3-D came with the introduction of 3-D models in games that offered more realism than the classically pixilated or hand-drawn game art. “Fast & Furious Adrenaline” is a beautiful example of how 3-D models of cars can make extremely simple game design look impressive. This iPhone/iPod Touch title features simple courses with little room to explore while racing, and yet the 3-D cars and some pretty but flat backgrounds can give the illusion of an immersive racing game. The design is so well organized that you’ll forget that it was on the iPhone.

As far as the game itself, the racing is controlled by tilting the iPhone, which results in most players either having trouble driving in a straight line or turning without skidding. The simple controls mean that most challenges only have two speeds – fast-as-possible or reverse when you t-bone into a wall – with the only real touch-activated aspects coming in the form of nitrous boosts or shifting gears in a drag race.

The oversimplified controls make for some frustrations while racing, but make for a fun game to just pick up and play on the go. There is something resembling a story that ties it to the movie franchise, but it is as forgettable as any other iPhone title. Ultimately, it is just a fun title with enough different types of races to keep from getting dull.

If this isn’t 3-D enough for you, Nintendo has taken the classic Japanese puzzle game of “Picross” into the third dimension with “Picross 3D” for the DS. The original version of “Picross” involves a square grid that has been lined with a row and column filled with numbers. By following the numbers, players attempt to plot dots on the grid to uncover a hidden picture. Trust me when I tell you that it is far more fun than it sounds.

“Picross 3D” expands this idea into a 3-dimensional cube where players can paint or chisel away at pieces to discover the hidden, 3-dimensional object lying within. By dragging the stylus around the screen, you can rotate the cube to read the numbers in all three axes for an experience that seems overwhelming at first, but quickly becomes a fun, intuitive interface.

The game teaches you the basics, but quickly ramps up the difficulty with asymmetrical puzzles. By the time you have learned how to hide slices of the 3-D grid to better dissect the puzzle, you’ll find that the game’s timer and five-mistake limit have you sweating over each time you hit a block. This is compounded by the fact that each stage contains two puzzles that can only be unlocked with enough stars that have been rewarded for perfect or near-perfect puzzle solving. Even old school “Picross” masters might have their confidence shaken by “One-Chance Challenges” and time challenges.

Beyond just how cool the ability to solve 3-D puzzles with the DS stylus is, perhaps the next coolest addition to this title is the “My Picross” feature. In this mode, you can actually build your own puzzle out of blocks using the same interface that you use to destroy puzzles in the main game. After a quick build and paint job, one button press will set the game on the task of turning your sculpture back into a solid cube of blocks for your friends to solve.

Both of these titles are unique takes on making a flat surface seem like a 3-D world, but more important, they are both amazingly fun to play on the go.

Games & Gadgets
Gaming against sexual assault, with 'Decisions That Matter' and other video games
1,407 views