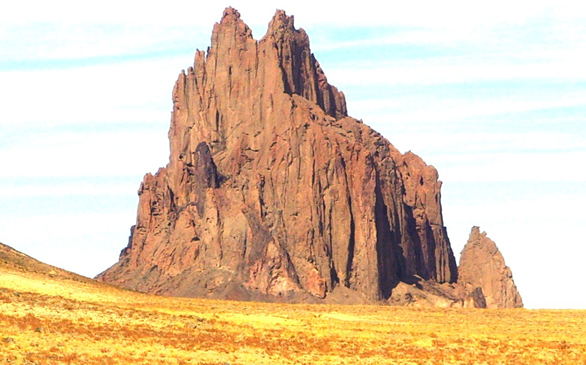 At first glance, the Two Grey Hills Trading Post on the Navajo Reservation near the town of Shiprock, N.M., doesn’t look like much. Dust swirls as you pull into the general store’s gravel parking lot where an unkempt dog or two wait, anxious to greet visitors with a sniff and a wag of the tail. But looks can be deceiving; you’d never discern just from its humble appearance that Two Grey Hills provides such an important service to the Navajo people, just as it has for over 100 years. This is where local ranchers and craftspeople come to sell their hand-woven Navajo rugs and bags of Churro wool; a place where turquoise and silver jewelry is bartered for food and other staples of everyday life.

Tourists in turn come to purchase authentic Navajo craftwork, and so the cycle of commerce is completed. It’s no wonder that the Two Grey Hills trading post and the surrounding area were of such great inspiration to the late author Tony Hillerman. Hillerman spent countless days meeting the people and enjoying the scenery of an area that has the iconic mountain known as Shiprock as its focal point. He often penned chapters of his detective novels while watching the comings and goings at local trading posts. A note from Hillerman is tacked to the weathered door at Two Grey Hills: “The real west begins on the front porch of the Two Grey Hills Trading Post.” Jim Chee and Joe Leaphorn, the Navajo cop characters that brought Hillerman’s stories to life, managed to solve many a modern-day mystery. But Hillerman country will forever be a place with many unanswered questions.

Farmington is the logical place from which to launch an exploration of the far northwestern part of New Mexico. The small city has plenty of hotels and restaurants to suit all tastes, a few good places to buy Navajo art and jewelry and even the Three Rivers Microbrewery, where you can grab a growler of freshly made beer after a day of adventure. This is one of the few places in America where buildings constructed hundreds of years ago by indigenous peoples still stand.

Archaeologists today understand quite a bit about the lives of the ancient Anasazi and Pueblo peoples, but they’ll also be the first to tell you that they have questions that their “digs” may never answer.

“That’s part of the fun for us as professional researchers,” says Larry Baker, the area’s most knowledgeable archaeologist and general go-to guy. “Just like you, we look at these places with amazement and wonderment.”

The places Baker refers to are myriad, and he sometimes leads personal tours of places like the Salmon Ruins, a “great house community” on the banks of the San Juan River just outside of Farmington. The remains of the 12th century Chacoan settlement is definitely the place to start an expedition. Baker or others at the site can direct you to ruins located throughout the ancestral Navajo homeland, including entire cities in Chaco Canyon. A bit harder to locate are the petroglyphs in Crow Canyon, but Baker can show you how to get to these, too.

The drive and hike to the rock art is not difficult, but very few people see the ancient symbols due to their remote location. Other than a few harmless tarantulas and a lizard or two, you may very well be the only creature within miles of the hidden treasure at any given time. And maybe just like Tony Hillerman and the ancient artists that came long before him, a visit to this splendid isolation will leave you inspired for a lifetime.