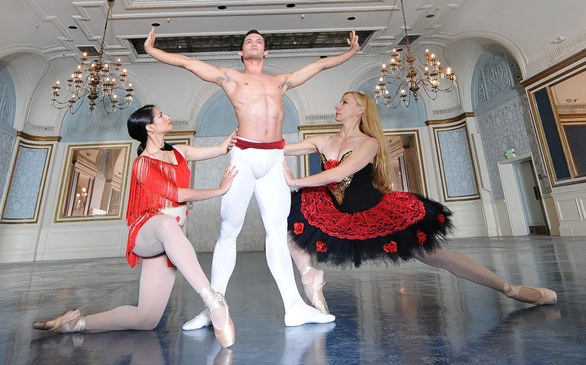 Cuban ballerina Annia Hidalgo, 24, is making it her personal goal to share her balance and assemble with audiences all over the world. She’s danced in Brazil, Guatemala, France, Chile, Spain and multiple other countries. Now, she’s made her way to America as a principal dancer for the Blankenship Ballet Company (BBC) of Venice, Calif.

Although she’s danced in several countries already, there are still a lot of other places on Hidalgo’s list

“I want to dance all over the world!” says Hidalgo. “I want to travel and make my work known.”

Hidalgo first graced the stage with Blankenship in October 2008.

“I’m in love with the company,” she gushes.

Hidalgo has thoroughly enjoyed her time with BBC, but does admit it’s quite a change from the style of dancing she was accustomed to in Cuba. During her time with the Ballet Nacional de Cuba, Hidalgo performed more classical styles of ballet. Here, she’s been learning a lot about George Balanchine as well as “Paquita.”

For Hidalgo’s next performance with the BBC on May 22, Hidalgo is most looking forward to performing “Paquita.” The Cuban Ballet Extravaganza showcases 18 world-class dancers in a grand arts venue in the round to allow audiences to witness the ballerinas up close and personally.

Aside from her husband, the rest of Hidalgo’s family resides in Cuba. Hidalgo does everything in her power to keep them close by updating them on her ballet experiences in America. She sends them flyers and pictures from all of her performances.

“They would love to be here. They’re really excited. My grandpa is my biggest supporter,” says Hidalgo

Her grandfather is always anxiously quizzing her about when and where the next performance is. Hidalgo considers herself lucky to have such love and support from her family. She knows they are the reason she has had the opportunities she has received.

“My mom loves ballet and my family loves the arts,” says Hidalgo, who trained at the Raul Gomez Garcia Vocational School of Arts, in the city of Holguin. Afterward, Hidalgo moved on to the Nacional Ballet School, under the guidance of Professor Ramona de Saa.

She’s been dancing for 15 years and professionally for seven. She studied modern dance in Cuba, but feels she’s “more comfy with classic.”

Hidalgo received the gold medal at the International Ballet Competition in Havana in 2004. She then joined the Ballet Nacional de Cuba, under the technical and artistic direction of world famous choreographer Alicia Alonso.

Of the Blankenship performers, Hidalgo is the most recent to defect from the Ballet Nacional de Cuba.

As for her future with Blankenship Ballet, Hidalgo says she will stay as long as they will have her.

“I want to be with them. I’m really happy there,” she shares.

Not only is Hidalgo looking out for her future, but the company’s as well. She hopes the BBC expands so they can travel and showcase their art in other states.