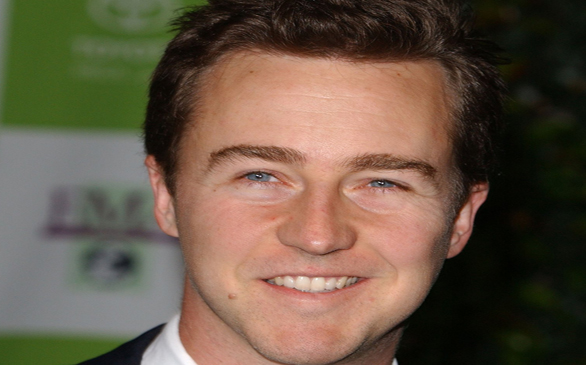 If you don’t give, no one will like you.”

No, that isn’t the sign a witty panhandler was seen holding at the end of an off-ramp; it’s the slogan for Edward Norton’s latest endeavor, Crowdrise. Neither a play nor a movie, Crowdrise is a new Web site spearheaded by the Oscar-nominated actor and devout philanthropist.

A mighty hybrid of social networking and grassroots fundraising, it’s as enjoyable to read and surf as anything you might find on Facebook. But Norton isn’t looking to create the world’s next great time suck. He and his partners are working to harness the power of social media for the greater good. However, that doesn’t mean it can’t be fun.

“Those are the first three letters in fundraising,” Norton says, as dry as a Triscuit, the corners of his mouth curling up slightly.

In a black button-down shirt and dark jeans, a North Face backpack by his side, Norton’s fierce intelligence and tremendous eloquence make him seem less like a movie star and more like a college professor from a Police song as he discusses the inspiration for Crowdrise one sunny afternoon in a glass high-rise overlooking West Los Angeles.

He says the idea began with his Maasai Marathon Web site, one of the top fundraising successes of last fall’s New York City Marathon, raising $1.2 million in just eight weeks. Norton’s accomplishment drew attention from a number of charities and individuals who approached the actor for help, hoping to emulate his success.

Partnering with tech wizards Robert and Jeffrey Wolfe, he says they decided they didn’t know everything, “but we knew a few things about how to make this more fun, and no one else was providing that platform. When we were talking about [Crowdrise] and looking around, those mechanisms were really dry. They weren’t giving people any kind of coaching in how to do it well [or] utilizing what makes social networking fun and engaging.”

So Norton and his partners set out to create an easy and, yes, fun way for people to raise money for the causes they care about.

When you hear the words “grassroots” and “fundraising” and “philanthropy,” it can seem overwhelming and distant. But a few moments on Crowdrise and you realize this isn’t your grandma’s church bake sale. From the clothing named after characters in Wedding Crashers and Role Models to a banner advertising the chance to win a MacBook with a $9 donation that reads, “I have a MacBook. I spend almost all my time looking at myself in the Photo Booth thing,” Crowdrise is refreshing and accessible, inviting you to earn points, get involved and allow your voice to be heard.

“One of my partners, Robert, is just really funny,” Norton chuckles. “He put things up like, ‘Click here for [a] beautiful picture of a napkin.’ We’ve had 5,000 people send us pictures of their own napkins. Swear to God. If you boil it down, people use Facebook, Twitter, all that stuff, for one reason: to share their personal narrative. It’s like, ‘I’m important. Here’s who I am. Here’s what I’m doing. This is why you should care.’ I just think people dig being part of something.”

It’s that yearning for community and connection that makes giving such an important part of American culture as well. Perhaps that’s why smaller, more personal, individual giving has becoming so popular at a time when many people are suffering financially.

“I think we are very inclined, as a country, to get together and raise money for things. It’s kind of in us,” Norton says. “There’s a sense that, when times are tough, people know it’s tough for other people, and that’s when we really need to step up. I also do think this president, and administration, was itself a pretty remarkable achievement in terms of a movement. They have succeeded in creating a sensation. Obama did such a good job of saying, ‘Your $25 bucks helped us raise $700 million.’ They gave people a sense that their little bit mattered. They don’t feel small anymore. There’s power in numbers.”

Norton firmly believes in the potential of communal effort and already has his hopes high for what Crowdrise can do.

“I’m waiting for my pals who I did this with to send me the e-mail that says, ‘There’s been $100 million donated through the site.’ That would be awesome.”