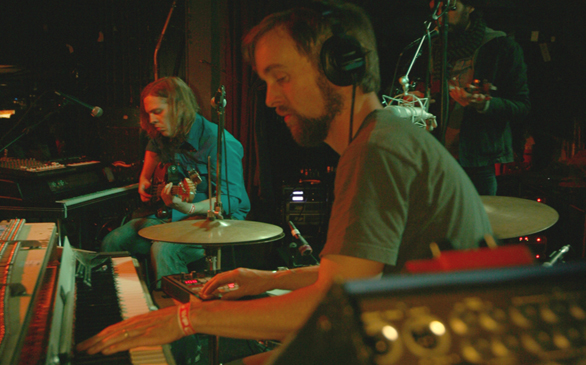 Mike Lewis and Martin Luther King Chavez Dosh (Yes, that’s his real name.) played the Echo on Cinco de Mayo as Dosh. Although there were no outward signs of celebration, there was one audience member who served as a reminder of the drinking holiday. Most notably by the way she skillfully/drunkenly made her way onto the stage during White Hinterland’s set and had to be dragged off by three security guards. Neither Casey nor Shawn of White Hinterland paid any mind to the whole ordeal. I get the feeling that if it was Baths, who was the opening act – and was quite good might I add – he probably would have had some fun with her before her less-than-eloquent exit.

Dosh took the stage a few songs and a long pause to set up later. The initially sparse crowd had filled up nicely by that point with a large group that was very familiar with Dosh’s music. It always comes as a surprise when a band that I’m just getting to know can attract such a huge number of fans and familiars without much radio play.

Another surprising thing was the number of DJs in the audience. It makes perfect sense, considering Dosh’s sample-friendly style of music, but I’d never seen so many showgoers walking around with vinyl that they purchased at the merch table.

The show itself was great. The amount and quality of sound put out by these two was amazing, so full and rounded. They played for about an hour, bouncing between keyboards, a drum set, a tenor sax and several knobs and effects pedals, but not really saying much to the crowd. I guess they figured they’d let the music speak for itself. And from what I heard, it was all great.