Minus the Bear: Pushing Forward 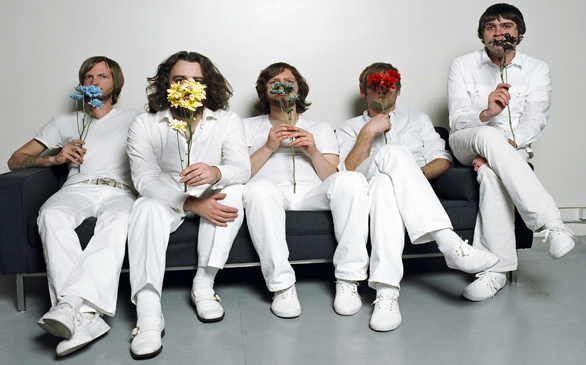 Minus the Bear are a band that challenges not only themselves, but music as a whole.

This electronic-experimental-indie-pop group from Seattle surprised listeners with their obscure time signatures on the release of 2001’s EP, This is What I Know About Being Gigantic. They made us fall in love with them using their titles alone on Highly Refined Pirates. They proved that electronic music contains love and depth on Menos el Oso, and they transported us to an alternate universe on Planet of Ice. With the release of Omni, it is clear that they’re not just a band you listen to, but learn from.

The first thing fans will notice about the new album is the presence of the Japanese Omnichord. Though it gives a definitive shape and spirit to the album, it is surprisingly not the inspiration for the title. The title is a representation of an alternate state of being.

“It’s everything and nothing,” says drummer Erin Tate, "and such a huge part of everyone’s lives.”

Omni is an album that has changed the culture of the band. After the amicable departure of longtime producer/keyboardist Matt Bayles, Minus the Bear sought refuge within the skilled hands of producer Joe Chiccarelli (The White Stripes, Tori Amos). The band took themselves out of their usual hands-on comfort zone and let themselves be led in a new direction.

“Joe is insanely focused,” says Tate. “It was really a learning experience for us. He brought a new light. We really respect and value the stuff he’s done.”

Working with an outside producer was only one of the many firsts Omni took from the band. It is the first time they’ve recorded an album to tape because “bands don’t do that anymore,” says Tate. “Everything’s kind of all Pro Tools now, but there’s something about tape that gives it a warm, whole sound.”

Recording to tape would prove to be a bigger challenge than expected as the band sought to also give the album more of a live feel, something their previous records lacked. This meant more time was focused on laying down basic tracks because the band needed to play in sync, while still keeping true to the energy of each song.

“We played songs over and over again,” says Tate. “If one person messed up, we had to start all over. It was the first time we had spent 12 hours [on] one song, literally playing it over 100 times.”

Don’t worry, their trademark, synthesized undertone is not lost nor are the effortlessly insightful lyrics crooned by lead singer, Jake Snider. Their dedication to providing listeners with an experience is exemplified in the case of two songs: “Into the Mirror” and “Animal Backwards” – an experiment that successfully manipulated the backwards tracking of one song and transformed it into another.

“We wrote a whole different song, backwards,” says Tate. “Dave [Knudson, guitarist] had played the [“Into the Mirror”] samples backwards, and I had just bought a little electronic drum kit. I just started hitting the pad along with him, and we started going off. It turned out to be one of my favorite songs on the record. It’s so oddball.”

However “oddball” the approach might have been, the result was refreshing. (Tate does make mention that it is unlikely the song will be played during their touring season, as fans who are unfamiliar with the song might be set out of place.)

Omni is proof that if there’s one thing Minus the Bear do best, it’s evolve.

“In our opinion, it’s the best thing we’ve ever done,” says Tate. “I think it’s our most cohesive piece of work and our favorite batch of songs we’ve ever done collectively.”

Omni is currently available. Minus the Bear perform May 20 at the Mayan Theatre and May 21 at the Glass House. For more information, visit minusthebear.com.