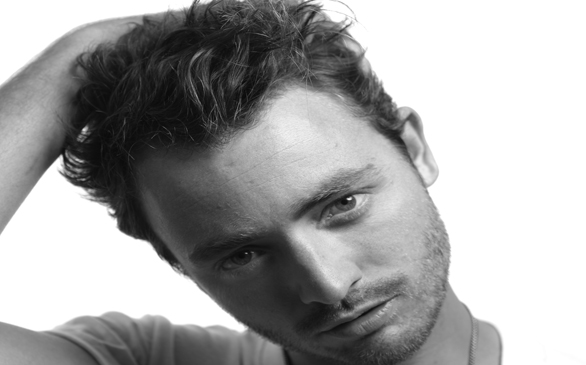 Picture Angourie, New South Wales, a small and idyllic town on Australia’s East Coast. About four hours south of Brisbane, you’d swear it was just a drive up the street, looking at Google Maps. Amid the endless sun, sand and surf that his hometown of less than 200 residents provides, a 9-year-old boy in a homemade replica of Michael Jackson’s outfit from the cover of Bad walks the beaches in a leather jacket and a singular glove. And thus the stage was set for Angourie native Ry Cuming to leave it all behind many years later to pursue the great rock ’n’ roll dream in Los Angeles.

Unfortunately, there are no existing photos of said Jacksonian ensemble – or so Cuming would have us believe. Having just finished his debut album, the acoustic guitar-slinging singer-songwriter has already been making a name for himself on the L.A. scene and is poised to make an even bigger one outside of it upon the album’s release.

“It was just a culmination of probably the last three to five years of writing,” he says of the songwriting process for the album. “When you’re experiencing new things and traveling, going through love won and love lost, you write organically, and I just got to the point where I had this stack of songs to go through. So the album is song-based. It wasn’t so much about a theme as it was about having songs that I really loved, and it ended up coming out half rock ’n’ roll, half kind of intimate.”

One listen to some of his already released tracks, like the sing-along jam “Tearing Me Apart” or the piano-driven ballad “Harder to Say,” and it’s clear that Cuming is just as much at home navigating L.A.’s music scene as he is on a surfboard in the South Pacific. But then, Cuming is no stranger to diving into foreign territory head first, and not just with his music.

“I love to travel. I love to experience new places and obviously, I try to find surf wherever I can,” he says. “I’ve never really explored Europe, but it doesn’t interest me as much as a lot of developing countries do, just because there’s a certain culture and mystery to those places.”

Well-traveled as he is, however, there’s always somewhere new Cuming wouldn’t mind exploring. As it happens, he’ll be doing a lot of exploring in the United States over the next many months with a hectic tour schedule planned out, including a stint on Maroon 5’s summer amphitheatre tour – quite a jump from playing tiny bars in Hollywood.

Though he’ll soon be playing to audiences of thousands every night, rather than just tens, Cuming remains undaunted by the task of translating his intimate sets to much larger crowds.

“I don’t know that I can do anything different. When I get on stage, I just try to be as honest as I can up there,” he says. “There’s always a way to bring it. Like Neil Young, Dylan, Joni Mitchell, those are people that I’ve always looked up to, that’s the example of how I want to be in front of bigger-sized audiences. I think if you really feel something when you’re playing it and you’re giving it all you have, people will click onto it.”

Given the predecessors whose footsteps he’s attempting to follow, Cuming is up to the task. But then, Cuming can jam out the quintessential cover song of the ages, like “Hallelujah,” without sounding the least bit trite or tiresome. Any other subsequent feats are easy by comparison.

“The first time I heard the album Grace by Jeff Buckley, it pretty much clicked that I knew I wanted to play music, and I wanted that to be my way of life,” he says. “Music has always been a salvation and a journey for me, if I can give anyone that same feeling, that they want to get into music and have that as part of their life, that’d be gift enough.”

With his mantra of “a life of love and a love of life,” Cuming’s attitude, as well as his skillful musicianship, should bring him more than his share of both.