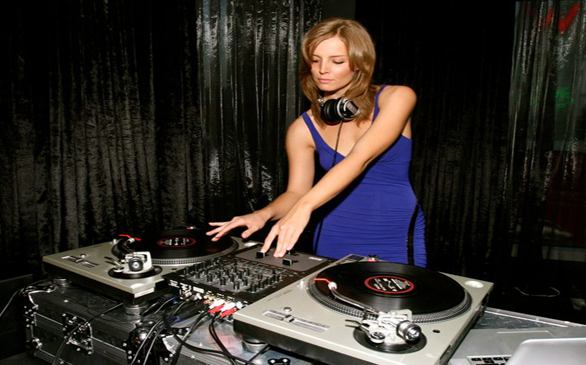 We hear that music is changing all the time due to the way we live our lives. That technology is pushing sounds in new directions. Guitarists are able to process sounds that they’ve created at home and bring them to the stage and integrate them into any song. Drummers have unlimited sound banks to pull from in order to create percussion that transforms the crowd’s emotion in the flick of a beat.

How has the advent of technology changed their musical palette? The mission is still the same: Get the party going and make the crowd dance until they drop. In Los Angeles, the nightlife landscape is ever changing and venues come and go; the one constant is the entertainment. If you don’t have a DJ who can keep the house packed and drinks flowing, you’re dead in the water.

“I don’t like limiting what I play. I enjoy playing stuff that gets the crowd going,” says DJ Cheapshot. “If I had my dream gig, it would be playing ’90s hip-hop all night, but that’s rare. Nowadays, people don’t even know who Black Sheep are. But you have to cater to the crowd. You can’t just play what you want to hear. That’s not what we get booked to do.”

So, if the DJs are still focused on the same mission, wouldn’t the gear stay the same as well? Can adding a new twist on the sound really be that important to getting the night flowing?

“I keep it simple and use a Technics 1200 turntable setup with a Rane 57 mixer. It has Serato built in and effects options. Add that to my MacBook, and I’m set. I don’t need to bring crates of records with me,” hip-hop DJ LadyMonix explains.

But is this lack of records just for touring DJs? LadyMonix talks about the effect of technology on the local scene.

“Every club has the same setup: Serato. It’s convenient, and you don’t have to bring your crates; but it’s not the same thing,” she shares.

She goes on to express the difference in using the Serato vinyl versus actual records: “It [actual vinyl] makes me feel connected to the music. It feels good, and when people see you using records, they respect you more.”

For those of you not familiar with Serato, here’s a little background. About seven years ago, the DJ world was turned upside down by the advent of the most groundbreaking technology offered to date. Users take two custom records and place them on their turntables, then connect a laptop to the equation. After the mixer is locked in and the system is powered up, the real fun begins.

With the click of a mouse or trackpad, you drag the MP3 of your choice and assign it to the turntable. Once the music is set, you now have the ability to treat that song as if it were an actual vinyl single. You can scratch and mix in real time without having to bring a single record to the club.

This new technology was available to DJs like Cheapshot and Kilmore from Incubus at first, but now it’s as common as a digital camera. And in the same respect that point and shoot cameras have given the average person the ability to try their hand at photography, Serato has opened up the music world to a whole new group of individuals.

“The new technology out there has a negative side and positive side,” states electro and nu-disco knockout, DJ Alex Merrell.

“It allows people with no music theory to just start DJing, but then it also allows you to gain access to a lot more music and it allows musicians to get their stuff out there a lot easier.”

“I grew up in a family of recording artists and played the drums, piano and even did choir, so I’ve had a big background in music,” adds DJ Alex. “So now I’m starting to incorporate other elements into my set that I use in the studio. I want to start bringing drum machines with me when I perform live. The more that I produce and create loops, the more of that I want to bring with me.”

Most notably, the integration of other machines into a setup was when Mix Master Mike hooked up a wah pedal to his mixer and started to scratch out the beats for “Three MC’s and One DJ” by the Beastie Boys. So, Alex isn’t far off from using her resources to spin things in a new way. In fact, it’s that kind of thing that allows DJs to truly expand on what has happened in their world.

A lot of traditionalists look down on the wide usage of Serato, but without it, some of these top DJs would never get the chance to tour. The days of carrying eight crates from show to show, plus turntables and a mixer, are long gone.

“I’ve been a part of some pretty big projects like Fort Minor, Styles of Beyond, Lexicon and now, even though I made fun of them when I was in fifth grade, I’m out spinning with New Kids on the Block. Bringing all those crates with me would be murder,” laughs Cheapshot.

But for those who use Serato and want to stay true to their roots, how realistic is it?

“There isn’t physical music anymore. I used to love going to the store and buying a CD and reading the booklet, but now that’s gone,” says Cheapshot. “I go and find rare stuff still when I can. I even took a bunch of crates from my parents and shipped them back to myself.”

“It’s important to be able to bring in new music to the clubs,” adds LadyMonix. “If it’s on the radio, I won’t play it. I want to play something new and give the crowd a fresh sound. Don’t ask for 'Boom Boom Pow.' Go sit in your car and listen to that shit. I play what I feel, that’s the role of the DJ, to feel out the room. The crowd doesn’t always know what’s best for them.”

So, how did these DJs get started?

“When I was a kid I was at a party and everyone was passed out, so I got on the tables and started goofing around. After that, I played a few parties and started making cash. I had no idea I would do this forever. I just got into it for the chicks … even though I never got any,” jokes Cheapshot.

Alex shares that she got into the music business on the music management side of things, but realized that she wasn’t doing what she wanted.

“I took a course at the Scratch DJ Academy with 18 other people. Some didn’t even know what a beat was. But I met Mark Luv from the Pharcyde and learned from him for three months before going public. I wanted to make sure I knew my stuff. I didn’t want people to dismiss me because I was a girl. And now I’m setting up a tour that will take me through Canada and Europe.”

To summarize, Cheapshot puts it all in perspective: “Technology will always change and offer new things to add to music and DJing. It’s up to the one making the music that really matters. Just like a photographer, you have to have an eye for it. Rich kids can stock up on all the latest gear out there, but that doesn’t make them Quincy Jones. You have to be good at what you do to really make the crowd move.”

LadyMonix spins every Wednesday and Friday at Bar Marmont. DJ Alex spins every Friday at Stone Rose Lounge at the Sofitel. DJ Cheapshot spins May 29 at the J-Lounge in Downtown. For more information, visit skamartist.com/djcheapshot.