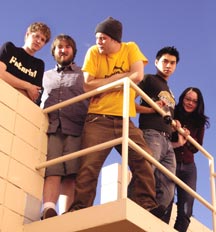 Intelligent rock music may strike many as an oxymoron of sorts, but those misguided souls haven’t had the luxury of being exposed to the keen sonic stylings of Pasadena’s Ozma. This four man brain-trust launches multi-layered, subtly-textured paeans of varying themes, fully drenched with cynicism and aural revelry. Their latest record, Spending Time on the Borderline, illustrates their penchant for pronounced guitars and thought-provoking lyricism, while expanding their scope of reference. Instead of focusing solely on love found, lost and unrequited-the tried and true touchstone of songwriting, Ozma has branched out with songs such as the lead single "Bad Dogs," and "Curve in the Old 1-9," which both delve into more serious matter, according to vocalist Daniel Brummer.

"Bad Dogs is a political song in that it makes people think," remarks Brummer, who is also the group’s bassist. "We also have a song about September 11th called "Curve in the Old 1-9" that says you’ve got to react to something like that with a lot of love and not a lot of reciprocal anger."

Of course, the requisite down-tempo mournfulness of "Come Home, Andrea," will appease those who can’t live without an album-supplied dash of the sweet sadness. Yet, as with all things Ozma, you shouldn’t take the track at just face value. It’s more than your typical, sappy ode to love, says Brummer.

Don’t be fooled, Ozma is about more than just making social statements and mocking weak balladry. Taking their name from an L. Frank Baum book and character, Ozma have been on the scene for quite some time now, touring nationally, and even opening for oft-compared nerd super-group, Weezer. Alongside Brummer, the band consists of Ryen Slegr, on lead guitar and vocals, Galvez, on rhythm guitar and vocals, Patrick Edwards, the bands skinsmith and keyboardist Star Wick.

Following up their ambitious two-part Doubble Donkey Disc, which paired a couple of older Ozma Ep’s to create a project who’s whole exceeded the sum of its parts, Spending Time on the Borderline, which is set to drop May 6th on Kung Fu Records, seems to be the beginning of a whole new chapter for the band.

"(Borderline) signals something new for us," declares Blummer. "Our first records were straight ahead, where we didn’t get too crazy with the instruments. This marks the first time that we’re considering the sounds of the instruments as part of the compositions and I consider it our first real full produced album-lots of keyboards, and additional instruments-strings, saxophones, and a marching band."

The band has been trying to embrace the fledgling, full-bodied sound found on the record and has begun weaving it into their nightly set lists. But it’s been slow going thus far.

"We’re actually learning the new songs live, because the record isn’t out yet," says Blummer, "We started the tour not knowing how to play the songs, but we’ve been working them in, a few songs every night and teaching our keyboard player how to play them."

While the learning curve may be steep, the challenge will be alleviated somewhat by a new animatronic friend they made recently on their current tour with Tennessee band Superdrag.

"The other night we found a talking parrot that would repeat everything you said but faster and higher in voice," Blummer chortles. "And he did all our stage banter for us."

Robotic parrot or not, Blummer knows what their fans are looking for when they show up for an Ozma show.

"When people come to a rock show they just want to get away from the world," he keenly intones.