Lost in the Desert: May 22 @ Silent Movie Theatre 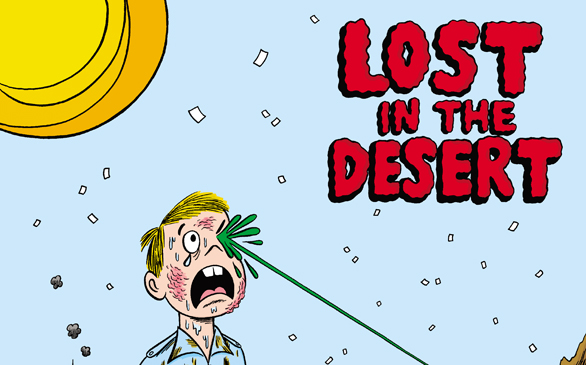 In Lost in the Desert, Dirkie gets stranded in the Kalahari.
(Credit: Courtesy of the Cinefamily)

Riding on the coattails of last week’s column, I have found the subject of children’s films increasingly fascinating. Obviously, my childhood was defined by the movies I watched, starting early with Disney animation – every single Disney animated movie and its soundtrack, which I, to this day, can still pull out of my dusty hat when there is an undeniable need for a party trick.

I saw my first rated R film when I was 7. No need to call children’s services, my mother had no idea. I was a somewhat conniving adolescent who convinced my poor-sighted grandmother that The Good Son (1993) was only rated PG. It was in fact rated R, and if you’ve seen it you would know why. Macaulay Culkin plays a psychotic 10-year-old who maliciously kills and creates damage to the people and things around him. Great film, though it’s more suitable for an older crowd.

But those are the films, the moments in your childhood that last for years and years in your memory. The Good Son forever resides in a nice little place in my adult heart along with other Catcher in the Rye moments of my life. I’m no longer scared of homicidal siblings, or of Macaulay Culkin, for that matter, but it was the beginning of the end of that clichéd innocence that writers and filmmakers and artists are so obsessed with.

Now that we are older and sometimes wiser, we can look back on the unusual things from our childhood made by adults who weren’t always the brightest bulbs in the tanning bed. One example that immediately comes to my mind is “The Ren and Stimpy Show,” which aired on Nickelodeon alongside more innocent shows like “Rugrats.” Ren and Stimpy were undoubtedly two of the foulest cartoon characters to creep into children’s homes. That show alone must have tortuously denied hundreds of kids a proper, healthy adulthood.

To get to my ever-elusive point, I will most certainly not start resuscitating theories by Piaget (look him up), but at some point we have to overcome the trauma of the past and learn to laugh at it. If we can. If you are still too scared to confront your old Ren and Stimpys, then abuse someone else’s with your therapeutic ridicule.

The Cinefamily is an organization of movie lovers who are dedicated to compiling interesting and quirky programs of films you would otherwise rarely see on the big screen. Housed at the Silent Movie Theatre, one of Hollywood’s historic landmarks, the group is serious in its endeavors to bring you a fantastic experience. May happens to be “Fucked-up Kids’ Movies” month. Every Saturday in May features a film or a series of clips from throughout the decades about those bizarre and nightmarish mutations known as kids’ films.

On May 22, the Cinefamily is presenting “Mondo Macabro Kiddo (Featuring Lost in the Desert).” What is that mumbo jumbo, you ask? It is the organization’s homemade compilation of insane footage that you would not believe was ever given the green light to pitch, make and market to a population of thumb-sucking little ones.

The group has slaved away in the archives, previewing buried footage to create a montage of demented children’s television shows and movies. Shows made in Brazil’s “Mouth of Garbage” district are featured alongside South Asian “fairy tales” about babies being eaten. They’ve even resurrected some of those after school, educational specials that may have prevented you from sleeping without a nightlight.

The main event, however, that will follow the surreal mix of children’s nightmares incarnate is the 1970 classic Lost in the Desert. It regales the story of an eight-year-old protagonist named Dirkie, who finds himself stranded in the Kalahari without water. It’s like The Road meets a select scenes from The English Patient meets Oliver Twist. His unfortunate circumstances are either a nightmare of a kids’ film or a comedy that lays on the sarcasm like heavy whipping cream on pumpkin pie.

It’s a nice retrospective look at the sinister elements of children’s films that have, most likely, lodged themselves comfortably in the back of our subconscious, waiting for quiet moments in our lives to come out and play.