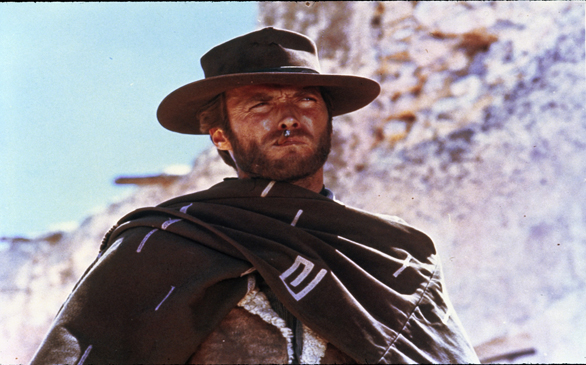 What is the name of Clint Eastwood’s character in The Man with No Name Trilogy?
(Credit: Twentieth Century Fox Home Entertainment )

Today marks a Screen Shots first: a Screen Shots Movie Quiz. Questions related and pertaining to movies, and in next week’s column, the answers along with my scathing chastisement directed at those of you who didn’t guess all the right answers. Just kidding.

But seriously, if you don’t know the answers to at least some of these questions you should be ashamed of yourself for even claiming to like films. And hey, if I get any of the questions wrong myself, I’ll look forward to reading scathing chastising e-mails directed at me.

1) In the film The Good, the Bad and the Ugly directed by Sergio Leone, what is the name on the grave that the coveted stash box full of gold is buried in?

2) In the Coen brothers-directed film Blood Simple, what is the character Loren Visser, played by M. Emmet Walsh, looking up at during the final scene of the film as he lies dying on the floor?

A) A crack in the ceiling

B) A ceiling fan

3) How many times has Robert De Niro appeared in a film directed by Martin Scorsese?

4) During the production of which film was the studio completely at odds with almost all of the casting choices and on the verge of firing the director throughout the duration of principle photography?

A) Lawrence of Arabia

5) In Sergio Leone’s The Man with No Name Trilogy, what is the name of Clint Eastwood’s character?

D) All of the above

E) It’s a trick question. He doesn’t have one.

6) What is the main reason Sonny Wortzik (played by Al Pacino) attempts to rob the bank in Dog Day Afternoon?

A) Revenge against the bank

B) To save his family from being homeless

C) To pay for his gay lover’s sex change surgery

D) To repay a debt to gangsters

7) What is the profession that Jon Voight’s character “Joe Buck” pursues when he arrives in New York at the beginning of the film Midnight Cowboy?

8) How many films has Woody Allen written, directed and starred in?

9) What is the name of the villain who murders James Bond’s wife?

10) What actor delivers the line: “You don’t understand! I coulda had class. I coulda been a contender. I could’ve been somebody, instead of a bum, which is what I am.”