Shrek Forever After: Is the ogre oeuvre over? 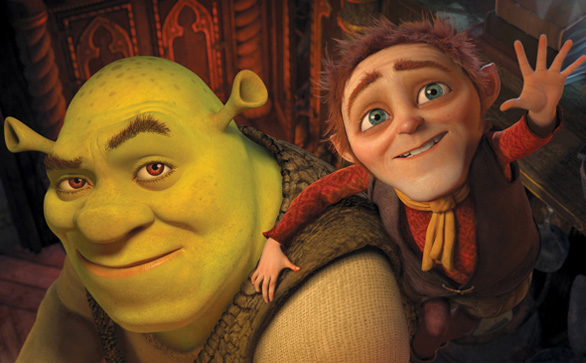 The fourth and reported final installment of Shrek finds Shrek (voiced by the indomitable Mike Myers) sick of domestic life with Fiona (Cameron Diaz) and their three ogre babies. After asking bamboozling Rumpelstiltskin to help him get back to feeling like a real ogre again, he finds himself in an alternate version of Far Far Away where Rumpelstiltskin is king, ogres are hunted and he and Fiona have never met.

Coming to the end of their journey, at the press conference promoting their film, I ask the cast if there was anything they might do differently in the previous Shrek films, given a do-over.

“When I first started the movies, I didn’t know who was playing my parents,” Diaz admits. “If I had known that Fiona’s parents both had British accents when I first did it, I might have changed something,” she laughs. “It was like ‘Wait a second! How come I sound like I’m from California?’”

Myers, however, wouldn’t change a thing and is very proud of the series. He says that throughout the process, he was “just blown away that an animated movie would look deeper and it was something people would invest in emotionally. I think Shrek is a little bit like Flintstones Vitamins. You’re eating Barney and Dino and you don’t need to know what’s good for you, but the delivery system is quite enjoyable.”

While endings are always bittersweet, the final Shrek was absolutely triumphant for one DreamWorks animator-turned-actor, Walt Dohrn, who was cast in the role of Rumpelstiltskin. Director Mike Mitchell, who claims DreamWorks runs “like a hippie commune,” explains that using in-house talent for scratch track is a tradition at DreamWorks, and sometimes those voices stick.

“When it came time to replace Walt’s voice and cast someone, we found that his voice was irreplaceable,” Mitchell says. “It was so funny and engaging. When we announced that we were indeed sticking with the scratch track that Walt had provided, all the animators stood up and cheered because they couldn’t wait to animate it.”

Dohrn, a lovable redhead who looks like a slightly skinnier, sweeter version of Ain’t It Cool News’ Harry Knowles, says, “I never thought that I would get cast, and I thought if I did, I’d have to do things like [press conferences], so I was freaked out. But, of course, I’d like to be part of this amazing talent.”

“You already are,” Diaz smiles. “Walt did most of the voices in scratch for all of us. I don’t know how good of a Fiona he did…”

“Oh, [Mike and I] shared some moments,” Dohrn jokes.

“What about my accent?” Antonio Banderas asks in his incredibly recognizable thick and rumbling Spanish-flecked voice.

“Actually I played you a lot in scratch,” Dohrn replies timidly.

“Do it!” the entire panel insists.

At first too embarrassed, after a few more cries of “Do it!” from the audience, Dohrn collects himself for a moment before offering Puss in Boots’ signature line from Shrek Forever After, “Feed me, if you dare,” in one of the best Banderas impersonations imaginable, inspiring a room of cynical journalists and too cool for school movie stars to spontaneously erupt in applause just as Shrek’s animators were said to do at news of Dohrn’s casting.

“Now I know who does the [Nasonex] bee!” Diaz squeals before gathering herself and continuing, “I was so happy when I heard it was [Walt playing Rumpelstiltskin] because he’s brilliant at it, and if someone else had come in and did it, I don’t think it would’ve had the same resonance. It’s his character.”

“I didn’t realize he had done it until I saw the movie cut together,” Eddie Murphy says. “I was like, ‘Who the fuck is doing Rumpelstiltskin?’ I tripped out. I was blown away by it.”

Shrek Forever After releases in theaters May 21.
Article posted on 5/17/2010
This article has been viewed 2807 times.