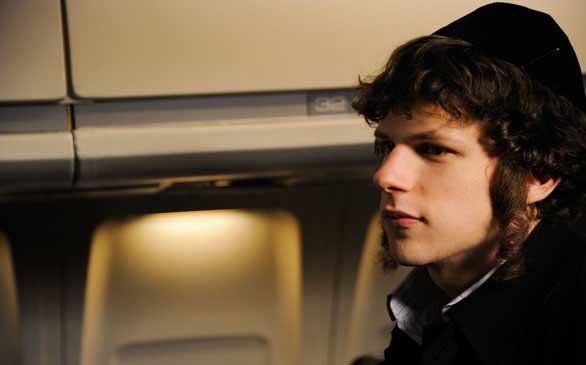 Despite what you may think, Holy Rollers isn’t about grandmas heading to Pentecostal church bingo, nor does it have anything to do with a virginal roller derby team. It’s the true story of young Hassidic Jews who smuggled Ecstasy from Amsterdam to Brooklyn in the late 1990s.

Jesse Eisenberg stars as Sam Gold, a good Jewish boy studying to be a rabbi and awaiting approval for his arranged marriage. But when he’s rejected by the family of his would-be bride for what he thinks is financial shortcomings, he allows himself to be sucked over to the dark side by his neighbor, Yosef (The Hangover’s Justin Bartha), who has ties to an Israeli drug cartel. Told to “mind your business and act Jewish,” Sam finds his religion is the perfect cover for an unsuspected drug runner in the middle of a major crisis of faith.

Watching the movie, it has shades of The Believer, the film that launched Ryan Gosling’s career. Many people felt Gosling was able to connect with the role of a neo-Nazi Jew because he was raised Mormon and could understand, not necessarily zealotry, but what an intense religious connection can mean. Similarly, screenwriter Antonio Macia is a converted Mormon who has gone on lengthy missions. Could it be that his background is one of the reasons he wanted to write this film?

“The other thing about him is he grew up in a Catholic family,” Eisenberg points out. “He chose Mormonism himself, which I think makes it that much more interesting. He is very interested in religion. He has, this is something I have trouble relating to, very complicated ties to his faith – conflicts in it, great affection. When he wrote the script, the great conflict for my character of faith and blind faith, how much does he feel invested spiritually in Judaism and does he feel it strongly enough to stray? That was the main interest for Antonio.”

Although Eisenberg is Jewish and grew up not far from where the film takes place, delving into the world of Hassidic Judaism was a major undertaking. He admits he remembered a few prayers from Hebrew school as a child, but that was just a minor jumping off point into a culture he says was, “very fascinating to me. I felt at once familiar with them and a little in awe of them. They have such a different lifestyle and yet there are similarities. Primarily, it’s the ancestry. I’m very interested in my ancestry and chances are, in talking to a number of people in preparation for this movie, we come from the same towns in Eastern Europe. We probably have relatives who knew each other.”

The actor says he’d spend hours and days speaking with Hasidic Jews. He never revealed he was doing a movie and most people didn’t ask, they just thought he was a secular Jew interested in becoming more in touch with his faith. While waiting for financing to be secured for the small independent film, Eisenberg spent two years researching the role.

“That’s just the nature of these small movies,” he says matter-of-factly. “If it’s taking a lot of time to get financed, you can really indulge in the process. It’s rare for an actor to indulge in the preparation for a film role for years. The down side is, sometimes you do that and the movies just don’t get made, which I’ve also had happen.”

Along the way, through development hell and shooting, he had a comrade in arms: Bartha.

“I met Justin at an audition for a movie where they were doing a mix-and-match. It’s basically the worst experience you can have as an actor because you don’t just have to audition, you have to audition with everyone there and sit in the waiting room with them. It’s a very uncomfortable environment. We commiserated [and] stayed friends since.” Friends for over six years, Eisenberg admits he’d been looking for a film they could do together when he read the script for Holy Rollers.

“He went above and beyond what I imagined for the role. I thought, ‘This is perfect.’”

Holy Rollers releases in select theaters May 21.
Article posted on 5/17/2010
This article has been viewed 1539 times.