(Here and There Productions)
By Denise Guerra 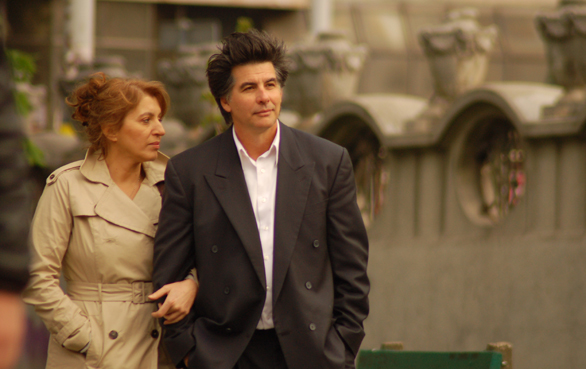 There are different ways of telling a story that don’t require a deep-thinking narrator or long dialogue. Sometimes characters don’t have to do much to get a reaction; it’s the little things that count.

Here and There starts with an interesting story about Robert (David Thornton), a destitute New Yorker who, on the verge of being evicted, strikes a deal with his mover, Branko. In need of money, he’s promised $5,000 to travel to Belgrade to marry Branko’s girlfriend so that she’ll be able to come to the United States legally. The only problem is that once Robert sets foot in Belgrade, Branko’s moving van is stolen along with all of his hopes of paying Robert.

Here and There is minimalist storytelling at its best, letting the situation and the visual transitions between New York City and post-war Serbia speak for themselves. At the very least, this is a love story, but beneath that is the need for everyone to find a sense of place, whether it’s a country or a person. The movie traverses the line of being an international film with American roots, and not really an art house film, but takes from the subtlety of its images and dynamic camera angles.

Writer-director Darko Lungulov was born in Serbia and later came to New York in 1991. The film is a reflection of this, and also a deeper telling of the culture and resilience of the Serbian people as a whole.

What I love most about the film is the old-style trumpet and jazz compositions used throughout its storyline. The music in Here and There is its best aesthetic. Also you can find a cameo by ’80s pop icon Cyndi Lauper, who also happens to be married to Thornton.