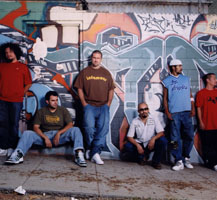 Ozomatli is the sort of band that you’ve surely heard of, even if you haven’t heard their music. Its members are local legends, with the band’s OZO logo plastered on street signs across Southern California. The band began here as a local L.A. band, so it’s only logical that they have a huge hometown following. In fact, it could be easily asserted that Ozomatli is the sound of Los Angeles itself.

The band’s music blends Latin instrumentals and hip-hop grooves, while still incorporating a strong rock vibe. With its 10 members on stage, one might think that the tendency would be to chaos, but Ozomatli is a well-oiled music machine.

"We have a lot going on, onstage," says vocalist and guitarist Raul Pacheco, "but we aren’t a jam band. That’s not the direction we take it."

On their most recent album, Street Signs, Ozomatli brought in even more musicians to play on their tracks. Everyone from Jurassic 5’s MC Chali 2Na, to members of the Prague Symphony, to a legendary Latin pianist were invited into the studio to work on music with the border-pushing group.

Because of these collaborations, the Ozomatli’s album plays more like a compilation, with every track sounding like the pinnacle of its own particular style. A track like the radio single "Saturday Night" is fit for a hip-hop dance party, whereas "Te Estoy Buscando" is a mournful Spanish ballad more likely to be found on Telemundo. Infused with Arabic string undertones and other unique sounds, Ozomatli’s music refuses to fit a genre. It’s as if the band can’t get enough of different styles of multi-cultural music, their hunger for new sounds almost as voracious as their instinct to tour.

Recently having played a huge show at Los Angeles’ Universal Amphitheater, the members of Ozomatli aren’t resting on their laurels. The band seems to be tied to the road and understands that touring is vital to any band’s survival. Pacheco explains, "We have had the chance to play for millions of people, and that’s been a great experience."

Though Ozomatli are crisscrossing the U.S. for the remainder of the year, the band will make three stops in So Cal, much to the delight of their local fans. They will be playing at Santa Anita Park in Arcadia on Oct. 1 and at The Vault 350 in Long Beach on Oct. 7. They will also be grooving with the ponies at Hollywood Park on Nov. 5, tearing the roof off of the House of Blues in Anaheim Dec. 16, 17 and 18 and making music at Disney Concert Hall in Los Angeles on Dec. 22.

The band’s name is also tied to a strong sense of social activism that has been with Ozomatli since the beginning. "It’s how we got started," says bassist Wil-Dog Abers. "If not for politics, we wouldn’t be a band."

Though they shy away from endorsing any one political cause, the band encourages others to get politically involved. "Even if we weren’t making music, we would be involved politically," Abers explains, "but we’re not really preachy."

One topic that the band uniformly agrees upon is their opposition to the War in Iraq, having played at the protest of the 2000 Democratic National Convention alongside Rage Against the Machine. Pancheco stresses, however, that while they show support for causes they believe in, they don’t sermonize at their shows or force their beliefs on others.

Pacheco prefers to explain his political views in the same way that he explains the band’s music. "It’s all about the differences," he says, "that’s what we are about. Just celebrating those differences."