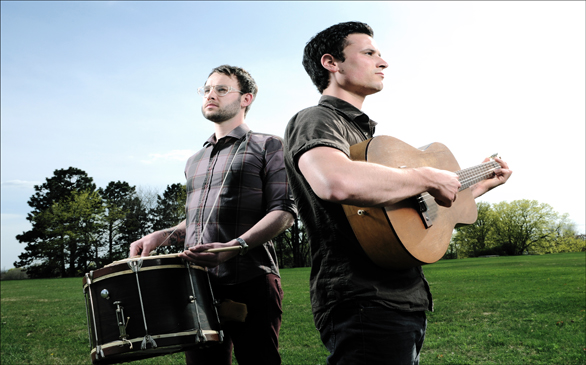 Not to be confused with former J. Geils Band singer Peter Wolf, who also has a new album out, Peter Wolf Crier is a duo consisting of singer/multi-instrumentalist Peter Pisano and drummer Brian Moen. The pair works mostly in a stripped-down, lo-fi format with songs like “Demo 01,” consisting of little more than delicate vocals from Pisano accompanied by slow and reverberating acoustic guitar and a bit of tinkling piano.

Elsewhere Moen’s percussion provides some power, like on “Hard as Nails,” where his continuous drum rolls start out at a trot but grow progressively more forceful until they’re galloping along full steam. Pisano has an interesting singing style where he sometimes affects a mumble, and while it’s hard to understand what he’s saying while he’s doing this, the technique draws attention to the song like a more sophisticated vocal hook would. A similarly simple vocal trick provides the hook on “Down Down Down,” where Pisano turns the title into six syllables by pronouncing “down” as “dow-hown.”

Inter-Be is hard to fully appreciate with a casual listen, but those who are willing to take the time to get accustomed to Pisano’s voice and let the subtleties reveal themselves will be amply rewarded.