A Case for the Liberal Arts 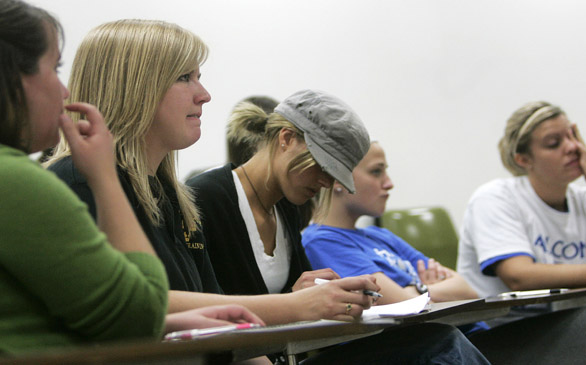 I was rather taken aback by an article from the New York Times that an old friend of mine posted on Facebook with the comment, “Now you tell me.” Opening the link, the title reads: “Plan B: Skip College.”

After just graduating, I mirrored my friend’s sentiments. Really, NYT, you’re telling me this now?

Since its publication on May 16, the article has garnered numerous comments and re-posts all across the Web, opening up a series of age-old battles that I’m sure would have made Aristotle cry in his sleep. Battles such as whether you’re better off financially learning vocational and technical skills or taking four years of Early Renaissance Art. Or, whether college is really practical for everyone. And practicality is the meat to this discussion, since the article wasn’t advocating that some go to college and some don’t. It merely gives the opinions of economists on the necessity of spending so much money on an education when, quoting from the Bureau of Labor Statistics, only seven of the 30 jobs projected to grow the fastest over the next decade in the United States require a bachelor’s degree.

Now, if we stick with practicality in terms of being a viable candidate in the job market, there is an assumption that the Humanities/Social Sciences/Liberal Arts (i.e. the study of languages, history, literature and every theoretical-based study involving some man with a white wig) is really just a route to living in a cardboard box next to the homeless man at Starbucks. Check out the Facebook group: I picked a major I like, and one day I will probably be living in a box, for which I am a very proud member.

It also brings about a joke I once heard at UCLA. As some may know, the school is divided by the humanities-rich North Campus, and the math and science-filled trenches of South Campus. If you judge each campus by its buildings, you will realize that North Campus has it going on, with Royce Hall, Powell Library and rolling green hills filled with sculptures and trendy-dressed students refreshed and relaxed daydreaming about philosophy and literature. South Campus is the total opposite: It’s a dark cloud of sleep-deprived zombies. The architecture: sad and old. Students are constantly competing against the curve, and the subjectivity that comes with writing your opinion on Eastern versus Western Literature (which makes for easier access to higher grades) is completely erased when your whole grade in math and sciences is based on getting one answer – the right one.

Honestly, I have mad respect for my neighbors to the south, because while I was relishing in the sunshine of sociology and poetry, they can take their degrees straight to the bank, because today, the practicality of working more with algorithms and computers is in demand as the Internet grows and our world becomes a little bit more like the Disney Channel’s Zenon: Girl of the 21st Century. Also the healthcare industry is exploding with the need for new medicines, doctors and nurses to fill the growing baby-boomer population.

Does this mean my liberal arts degree is worthless? Hell no. It cost me a good two student loans, but other than that, the value is far more intrinsic, including the ability to communicate interpersonally and within different levels of groups. All that daydreaming and philosophy also doesn’t go to waste since your mind is trained to problem solve creatively versus within a confined realm of rules.

Of course, unless you’re planning on getting a master’s or doctorate, and later teaching a course on Early Renaissance Art, specializing in that major doesn’t mean you’re a total employment leper to the outside world. What a liberal arts degree does is provide individual internal growth, which translates very broadly into skill sets for a range of jobs.

Now, I’m in no way pitting the arts against the sciences. Frankly, I’m a proponent for both, but I feel that in this day and age, society gears individuals toward the route of the math and sciences because it’s where one will be most “successful.” But I say, if it weren’t for languages, literature, art and history, there wouldn’t be the gazillions of knowledge, entertainment, human development, design, drama and inspiration that has shaped and continually shapes our society today. Our success isn’t in monetary assets. It’s in the humanities’ development.