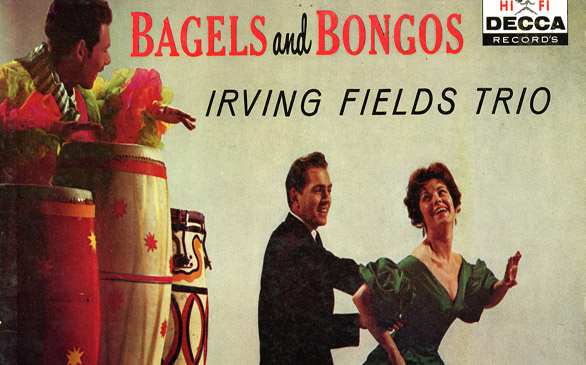 The Skirball is known for preserving Jewish heritage through art and education. In their newest display of a little known side of Jewish culture, the Skirball in association with the Idelsohn Society for Musical Preservation brings you a showcase of vintage record albums from the 1940s to the 1980s called Jews on Vinyl.

Now, the title may conjure up images of a super lame perversion of a Duran Duran song (“Girls on Film,” anyone? Seriously, the title’s been playing on a loop to that tune since I heard it.), but this single room exhibition is actually a rather impressive collection of rare albums that would otherwise be lost to time.

In a retro-chic lounge style display, visitors are invited to explore songs off of albums like Bagels and Bongos, Batman and Rubin and Jerusalem of Gold at listening stations scattered throughout the room and examine the cultural evolution and history as documented by the expansive collection of album artwork.

While there are a lot of listening stations, there are only two sets of playlists to choose from, and one of them is full of versions of “Hava Nagila.” Of course, you’ll hear from the holy trifecta of Jewish crooners (Barbra Streisand, Barry Manilow and Neil Diamond), but there are also pieces from Billie Holiday and Lena Horne, some forgotten Jewish comedians (and comediennes) and even famous cantors.

But these songs and album covers are more than records of music. They’re also a cultural record that helps to chronicle the history of a Jewish search for identity. There are records that sought to teach Yiddish to everyone, that tried to make Judaism accessible to mainstream Americans, that showcased Jews trying to fit into popular American culture and that even documented the Zionist Movement. And that’s just to start off with.

For the Idelsohn Society, this exhibit has been a real labor of love. Not only do they sift through dusty bins in record stores and garage sales to actively seek out the fading vinyl of Jewish artists from around the world, but they also started a whole community to help exchange both records and knowledge.

Guest curators Roger Bennett and Josh Kun have done an excellent job of collecting and preserving the music itself, but without a Jewish background and a working knowledge of a LOT of Jewish history, it’s hard to understand the stories and the history that the music represents in the context of the exhibition.

Yes, it’s an impressive collection, but to the casual observer, it’s too easy to see it as a kitschy assortment of Jewish recordings. It’s definitely still worth a listen, though, so be sure to check in for this summer’s two listening parties. The first is Go Down Moses, a celebration of African-American artists like Aretha Franklin and Johnny Mathis singing Jewish songs on June 3. But if that’s not up your alley, check out Mazel Tov, Mis Amigos where you’ll hear a showcase of Jewish songs with a Latin twist. Who knew there was such a thing as a Jewish mambo?

And the best part is that if you like what you hear, the Idelsohn Society doesn’t just put all of these songs into an exhibition to preserve the rich cultural history behind them, they also re-release lost albums and manage a digital database of all the music they can get their hands on. This way, the stories of the Jewish experience in America and worldwide can be preserved for future generations.