Prince of Persia: The Sands of Time: Jake Gyllenhaal wants to rock your world. 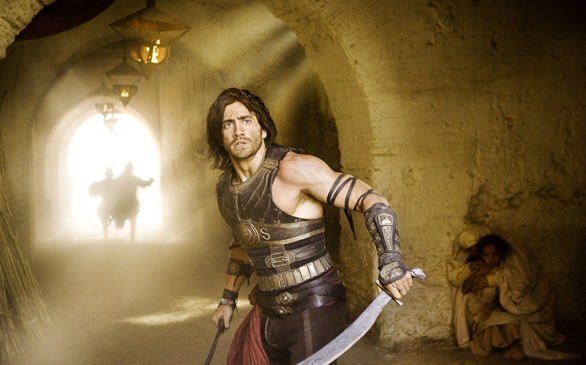 Jake Gyllenhaal, who made a name for himself in tender, heartfelt films like Brokeback Mountain and The Good Girl, is ready to kick some major ass in his new film, Prince of Persia: The Sands of Time. Based on the best-selling video game franchise, a super jacked Gyllenhaal – all gleaming muscles, genteel British accent and long hair – leads the charge as a rogue prince enlisted by a mysterious princess (Gemma Arterton) to prevent evil masterminds from obtaining an ancient dagger that can turn back time, controlling the past and the direction of the future.

First released in 1989, Gyllenhaal says he was already familiar with the game because he’d played it often as a kid.

“I used to play the side-scrolling version of ‘Prince of Persia,’ the original Jordan Mechner-created version, on the first Mac computer in elementary school,” he laughs. “And then I took like a 20-year hiatus. Sometimes I wish I could go back and tell that 8-year-old kid who was playing the game that one day, 20 some-odd years later, he would be playing the lead in a Jerry Bruckheimer blockbuster movie based on that video game and just see how his eyes would pop out of his head. For me, that’s kind of how I felt when I was making the movie. I felt like I was unlocking that piece of my childhood again. It was fun every day, running and jumping and fighting bad guys.”

And there is a lot of running and jumping. One of the things that makes the film, which many have pegged as an early contender for multiple sequels if it performs well at the box office, so interesting, is its use of parkour. Originated in France and sometimes called “free running,” the idea of parkour is to overcome any obstacle in your path by adapting your movements to the environment and using everything around you to your advantage.

Gyllenhaal, who trained for a year for the role (and it shows), says his regime began by working with gymnasts on landings so he’d have the look of fluidity that parkour requires, as well as cardio and extensive weight training.

“I didn’t really start doing the serious parkour stuff until we got to Morocco and we started choreographing the scenes on the top of the kasbahs and all the sets that we were shooting in,” he says. “I think the hardest part of doing it is the focus. Being present and training your mind to not worry about whether you’re gonna make the landing.”

Although Gyllenhaal previously stuck his toe into the action movie genre in The Day After Tomorrow, taking the lead as the titular Prince of Persia was way more than he ever could have imagined.

Then there was the stress of a crew of hundreds relying on his every move to make a film that had a budget that exceeded the gross of his last five films combined.

While filming, Gyllenhaal, still sounding a little overwhelmed, recounts what confronted him at the start of each morning.

“Every day I would drive up and there’d be five hundred cars lined up for miles before you even got to set. Then you would get to the base camp of set, and it would be like an army head set-up camp. There’d be these massive sets built that were 250 feet high with like every intricate detail done so that they could shoot anywhere. There are thousands of extras, and it’d take 40 minutes to put on my costume every morning. It was kind of like getting prepared for some big sporting event.”

Prince of Persia: The Sands of Time releases in theaters May 28.