Survival of the Dead: George A. Romero takes his dead to the big country. 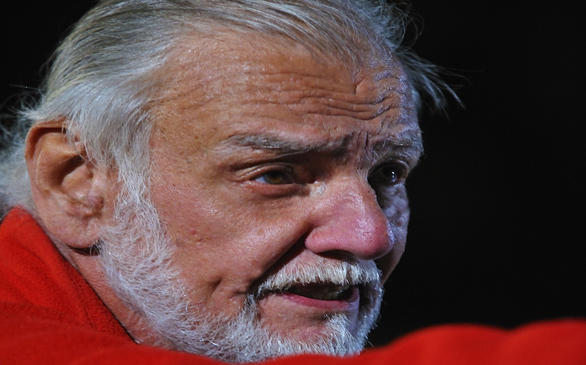 George A. Romero, director of Survival of the Dead
(Credit: Courtesy of Magnet Releasing)

George A. Romero has taken his zombies to some strange places in order to make some pretty bold statements about American consumerism, the military and class separation. But how did Romero decide that his next zombie opus would be a … classic western?

“I wanted to, uh, it’s sort of a long-ish story. Diary of the Dead I made very quickly after Land of the Dead, and I really sort of wanted to go back to the roots and go small again – after that film. We found partners in a company called Artfire out here, and they’re willing to finance projects under a certain number, finance 100 percent and gamble, sell it later. Which is great for me, and they were willing to give me creative control, so I thought Diary would maybe be a one-shot thing.”

Theme has always been integral to Romero’s zombie films, and Diary of the Dead was another way for Romero to speak out about our culture.

“I wanted to do it quickly because it’s about emerging media, citizen journalism and all that. I wanted to do it before somebody beat me to the punch. So, we made that and even though it had a limited release – in North America, anyway – it cost so little to make that it ended up worldwide, with video and TV and everything else, wound up making a lot of money. My partner and I were noodling around for ideas for other projects, non-zombie things, and all of a sudden when Diary made all that bread, Artfire wanted to do another one. Quickly.”

But if Romero was working on non-zombie projects, then what was the draw to continue making zombie films?

“I was attracted for a couple of reasons. First of all, I saw it as a bit of a new franchise that my partner and I would actually own a little piece of. The first four films are all controlled by different people. I can’t even get enough cooperation for them to put out a box set. So, forget trying to cross-collateralize used characters, you know? I’d love to take this ‘Bub’ or ‘Big Daddy’ [characters from previous …of the Dead films] and show them when they were alive. I’ve always wanted to do that, so I saw this as an opportunity to do that. I came up with three story ideas, based on taking minor characters from Diary, and I have this conceit that it would be nice to do this little collage of what the world was like three months, four months, five months in. It’s not about the Bush administration. It’s not about consumerism. I just wanted to go with a more generalized theme, which is: enmities that don’t die. War, in general, and anger. It seems like all of North America needs to take an anger management course. So that was the theme, and I had the idea of them going to an island. They get to the island and there’s the Hatfields and the McCoys, and they’re caught up in this feud that’s been going forever. I had the idea, let’s just really try to make them stylistically different, as well. I remembered the old William Wyler western The Big Country, and I sat with the D.P. and the production designer and everybody, and we watched The Big Country and said, ‘Let’s make that our model.’ That just made it that much more fun for us. It’s a layer, a stylistic layer that gave us something else to shoot for, and be interested in.”

So, how does Romero feel about being six films deep with zombies?

“I just love it. I’d like to do two more of them. I have a whole little stockpile of ideas that I’ve never been able to do over the years, but now can do with CGI. I grew up on EC comic books, you know, and those were always full of gags, bad puns and humor. I love doing it. It’s not stale for me.”

Survival of the Dead releases in select theaters May 28.