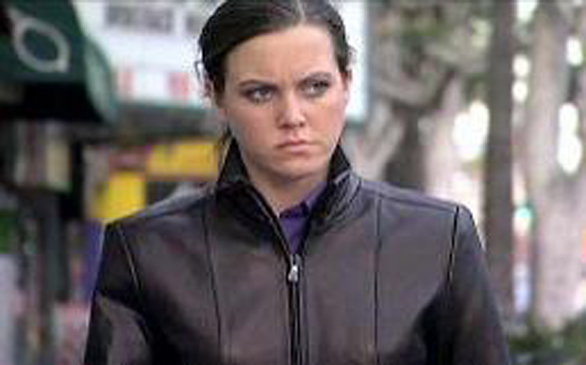 Nell Ruttledge in Prince of Swine

Ah, the Los Angeles cautionary tale ... my new favorite film genre. Prince of Swine is a film that dares to remove the shroud cloaking the dangers of the casting couch. In it, an idealistic feminist lawyer named Julie (Nell Ruttledge) becomes incensed by the story of a potential client at her law firm. The wronged buxom blonde tells Julie and her bosses the details of her treatment by a group of scumbag B-movie makers. This disgusts Julie so much that she passionately convinces her bosses to allow the firm to take on the case.

Soon, the sleazy producers and directors become fodder for the tabloid press, as do the alleged victims. Meanwhile, Julie has begun to sleep with the devil, when she beds her misogynist boss (Mark Toma). Is he just another Prince of Swine, or will he challenge her to put aside her anger long enough to fall in love?

Toma, who stars, wrote, directed and produced Prince of Swine, has a good film on his hands. He makes excellent use of Los Angeles as his backdrop, filming surprisingly stylized and haunting scenes. Shots of Hollywood Boulevard haven’t looked this cool since Pretty Woman. Toma easily captures the vibe of what it’s like to be a girl in this town, especially a girl who wants to be famous, by any means necessary.

The guy is also pretty charismatic, despite the ethically questionable attorney he portrays. But (and there’s a BIG “but”), Prince of Swine is a bit too campy for its own good. Watching it, I couldn’t help but wonder if it was supposed to be that cheesy in some places or was it just the best that could be done with their budget.

Maybe some of the time and effort it took to amp up the production value should have gone into casting people who can act. Ruttledge isn’t terrible in the film and does make for an interesting and well-rounded protagonist; I imagine that after a few more projects and the arbitrary “Law & Order” guest spot she’ll be ripe for stardom. Julian Starks, who portrays Julie’s other boss, is a solid performer and a good anchor to balance out some of the inexperienced actors.

All in all, Prince of Swine is a well-made satire that’s easily enjoyed, provided you’re not expecting Citizen Kane.

Prince of Swine releases in select theaters May 28.

Movie Reviews
Maverick' review: The danger zone has never felt so dangerous (and worth watching)
395 views