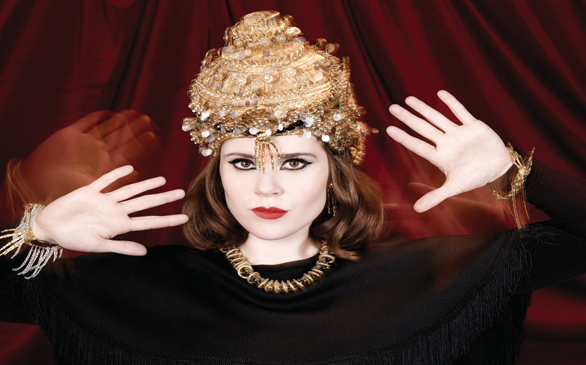 The distant slosh of liquor-to-glass is faintly heard among a swarming, chatty crowd who impatiently stare at a blank stage as they try to shove themselves a little bit closer to the pit at El Rey Theatre. As time tick-tocks closer to 8 p.m., the whoops, whistling and excitement are increased tenfold.

It’s eight and Kate Nash is still somewhere backstage.People’s breaths can be felt at the nape and there’s little room for elbow space, yet a few start to raise their arms and clap their hands, a few shout out randomly, “Kate Nash!” which cues the circus-y intro and the leather jacket, high-waisted pants-wearing Kate Nash to prance her way to center stage.

She hits the keyboard’s keys with full force and playfully warns the crowd, “If you’re not having fun, you’ll be kicked out of the venue.”She sings her uniquely-built indie numbers from her latest album, My Best Friend Is You, with her distinct, delicate British accent, which turns robust when she screeches (what she calls vocal warm-ups) or says things like “Ma-pi-da-pida-pida!”The rebel-yelling artist’s songs stay cheery and sweet, and much like her debut album, end up on the pop-tartsy side. All the rest take it to a higher plane filled with frustrated high-pitched shouts, steaming rants and with rogue lipstick all over that signals as a warning.

Between numbers, Nash took a swig of her vodka and Coke, received gifts from fans and raised her middle finger to all homophobes. Later that night, as part of her American tour, she introduced Super Cute, a head bow, pink-wearing all-girl band. According to Nash, they are the new Supremes.Nash delivered a comme ci, comme ça performance. Her show started off a bit slow, was real good in the middle as she sang her upbeat songs, but went all over the place soon after she sang “a lil’ frightening reflection” titled, “Mansion Song.”

Much like a burrito, nothing but tortilla was left toward the end, all the flavor, the filling – gone. If you weren’t satisfied, there was still plenty to quench your thirst as bartenders quickly mixed and poured it’s-all-better drinks for those 21 and up.