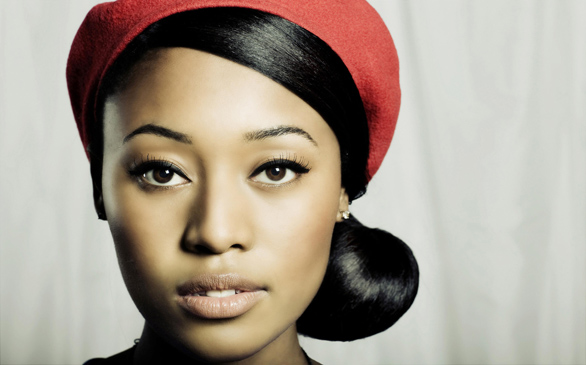 When I heard V.V. Brown was coming to town and playing a show at the Troubadour, I was really looking forward to seeing her perform. She not only lived up to any expectations that I had; she exceeded them!

A British import, her unique indie-pop sound and feel exemplifies real creativity. She came out on stage with a strong presence and intensity. First off, she is very striking and tall (being a former model) and rocked an Egyptian outfit with gold cuffs on her arm and her signature bangs. Barefoot, she got the crowd going playing the snare drum.

She had a full, live band with a horn section that added depth to her already strong vocals. You could tell that they were having great fun on stage and really hyping the audience. It was packed and people were singing along to every word.

V.V. Brown surprised the audience with a remake of Drake’s “Best I Ever Had,” and a tribute to Fela Kuti, which was amazing. The horn section started blowing and the audience was really energized. She also knew how to tone it down and played an R&B ballad called “I Love You.” Then she paid tribute to her Jamaican/Puerto Rican roots with a reggaeton-infused song called “Crying Blood” that required audience participation.

VV played the maracas, the snare drum, keyboard and piano, sometimes using props like a little Japanese umbrella. Some of her songs were dedicated to her ex-boyfriends, which were refreshing and honest. She was very open and engaging, switching between her ’50’s doo wop influences to current pop with her hit “Shark in the Water.”

I really enjoyed the show. I was glad that I was able to drag my friend along and open her eyes to someone new. V.V. Brown gets two thumbs up in my book.