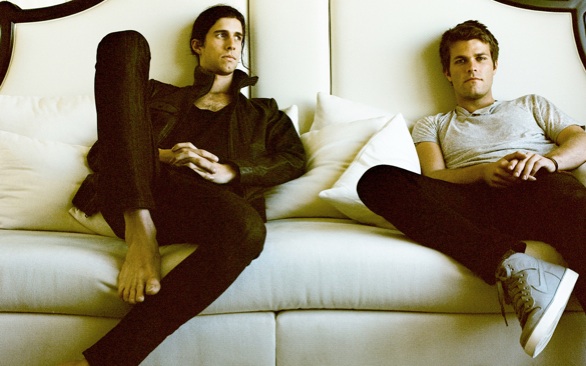 For those in the know, the phonetic phrase “303” refers to an area code in the metropolitan area of Denver, Colo. For the rest of us, 3OH!3 is a band that’s “well … two guys who … hmm … I dunno …they’re awesome!” as described by a Bay Area fan.

Originally, Boulder boys Sean Foreman and Nathaniel Motte had gone through “a series of bands that sucked” but kept doing music to eventually become 3OH!3.

To Foreman, “it just made sense.” It’s the “classic, cheesy friendship montage” of boy meets boy in physics lab, boys become best friends, boys become world famous electro rock duo. Once settled, it was a certain tattoo that Foreman has “in a private place … just kidding” on his leg that inspired the name for the band.

One of their most popular hits, “Don’t Trust Me,” left the public either with dropped jaws from lyrics referencing Helen Keller (and not in a politically correct way), or laughing along because everyone knows “a ho” in a black dress with the tights underneath. Now ladies, don’t get your panties in a bunch over this song, Foreman assures us, “I happen to really like women.” And as common as the little lady in “Don’t Trust Me” might seem, Foreman swears this girl is real.

“We both had our hearts broken … at the same time … by the same girl … just kidding. But seriously, she was a real situation,” he shares.

Hey, everyone deserves to vent over a broken heart at some point, it just so happens that these guys blow off steam through music that millions of people like to listen to and sing along with.

3OH!3 are now on their second album, Streets of Gold, which is set to drop everywhere June 29. This album is “straight up us,” says Foreman. It has “fun, carefree summer songs,” with inspiration coming from anywhere.

“It depends on the situation and song … a lot of it is just fun and was made to keep a ‘live’ component to it,” he continues.

If you preorder the deluxe version of Streets of Gold you not only get the CD, a 30-minute documentary of the making-of the album, but also a comic book drawn by Foreman himself.

However, within the CD, a few different things were thrown in the mix to switch it up; Foreman wrote “a sensitive song that means a lot” titled “I’m Not the One.” Another song to keep an ear out for is “My First Kiss” featuring Ke$ha. The fun lyrics “My first kiss went a little like this … – muah muah – and twist” will surely bring you back to that awkward first time your lips might’ve met “licorice lips and a tongue like candy.”

Interestingly enough, although Ke$ha’s “Blah, Blah, Blah” came out a short while ago, work on “My First Kiss” came first, and is what led to the second collaboration between the performers.

The music video for “My First Kiss” is set to be released soon, and given the duo’s previous work, it is sure to be entertaining.

The fun these guys have certainly shows in their music, videos and live performances.