Racism and the Workplace: Is your heritage holding you back? 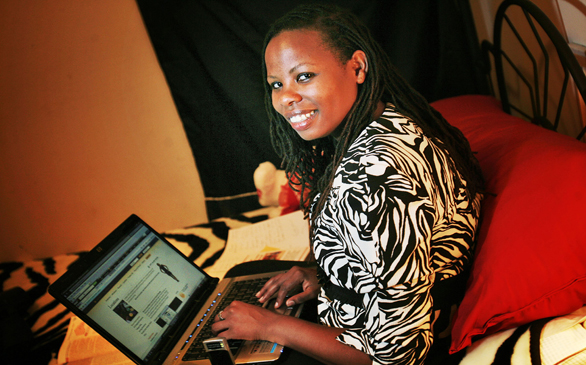 Does race matter when applying for a job?
(Credit: Roberto Gonzalez/Orlando Sentinel/MCT)

Hiring managers are the gatekeepers to financial viability. They determine whether or not someone will make money by completing tasks at a cubicle or will make rent via weekly unemployment checks. However, hiring managers, like the rest of us, are just people. They are not super-human beings or gifted with special powers. They are also not above the prejudices that sometimes make their way into our day-to-day lives. In a world where the gatekeepers could possibly withhold the key to certain members of the population, how likely is it that minorities are being pigeonholed professionally, based on the color of their skin?

Take recruitment, for example. Many companies have begun diversity hiring initiatives. Is the public to assume that the corporate world must create equality programs because department heads and recruiters cannot be trusted to think “broad spectrum” on their own?

Now retired, Nathan was a hiring manager for a leading aerospace corporation. She had nearly 25 years in the industry under her belt.

“We’re in the business of staffing these jobs. We look at each resume with a fresh set of eyes. How could I or any of my colleagues ever discriminate against somebody before they even set foot into my office?”

The answer? Quite easily, when you think about it: Names can be a giveaway for the ethnic makeup of a potential candidate. “Rodriguez” or “Garcia” are obviously Hispanic or Latino names; “Greenberg” or “Abramowitz” (for example) are Jewish in derivation. “Cheung,” “Yamaguchi” and “Watanabe” are Asian surnames. “Al Adhamy” and “Muhammed” are family names with roots among the Middle Eastern and Muslim communities. Within the African-American community, first names can be telling: Human Resource workers may assume race when encountering Afrocentric monikers like “Sheniqua,” “Tyrell” and “D’Shawn.” So for hiring managers to assert that they enter into candidacy decisions with foolproof racial blinders is about as big a falsehood as most of the stereotypes plaguing the applicants who are seeking job opportunities.

Aside from the issues with recruitment, stereotyping also exists when it comes to the actual interview process. Many managers rely upon stereotypes and make hiring decisions based on the cultural climate and perceived comfort level of the applicant. If you don’t agree, do the legwork yourself. Look around your company and see who’s working where. Are all (or most) of the African Americans in the accounting, administrative or customer service departments? Are the Caucasians and Asians working in creative or managerial positions? Are the Latinos employed in a janitorial or clerical capacity? Does your company even exhibit this level of racial diversity?

Critics argue that it is often difficult to find the Holy Grail: a qualified person of color who is skilled at the executive or creative level. Chat rooms and message boards like the Core77.com site are littered with requests to find people of color who can speak about their experiences in positions such as graphic design. Some contributors raise arguments that members of various ethnic communities are not aware that such job opportunities exist. While this may hold some shred of truth, for many applicants, the finger pointing is misdirected.

Twenty-nine-year-old Keisha Wilmore applied for a job at a local film studio. With a master’s degree in Motion Pictures and Television Production and a bachelor’s degree in Communications from a historically black college, she was hopeful to obtain her dream job in Ideation (These are the “idea” people at creative agencies.). While her impressive resume and portfolio were enough to land her an interview, she was immediately shot down for the job when the hiring manager told her she wasn’t right for that role, but wondered if she’d consider getting her feet wet in an entry-level position within the secretarial pool.

“I’m not trying to be an affirmative action hire,” says Wilmore, “but I do expect to get respect for what I’ve accomplished. That job went to a white guy I’d met in the reception area. He had a bachelor’s from Princeton, but the job called for a master’s.”

Does Wilmore feel she was passed over because she is black?

“I try not to think that way. I try really hard,” she says.