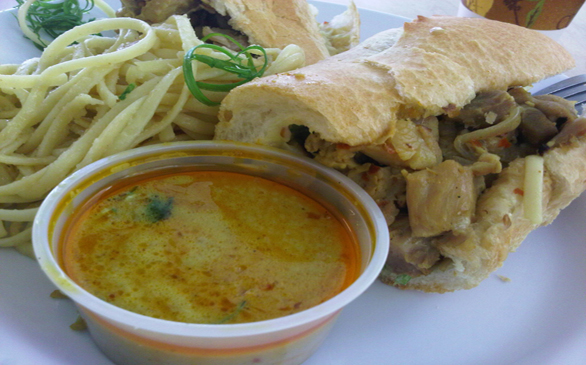 I’m not sure we realize how powerful word of mouth really is, especially if something is good and we want to be the one who spreads the word. Now imagine that hundreds of people think they found this little hidden gem and want to share it with their friends who then share it with their friends and so forth. Well, that is sort of what has happened with Starry Kitchen restaurant!

When Nguyen Tran’s wife Thi started cooking and serving original dishes for him, she would post the dish on her Facebook profile picture. Every single day she would post what she cooked the night before.

Nguyen states, “It was amazing, every single day a new dish, never to be repeated! Our friends soon started getting jealous, saying that they wanted to try this food, too.”

They came up with an idea to cook one day a week out of their apartment for friends and followers of her Facebook page for $5 donations. The idea was Pan-Asian comfort food, everything from Vietnamese and Thai to Malaysian and Japanese. Nguyen and Thi would make just one dish and serve it until it ran out. The demand grew so much that they added a second day during the week.

Nguyen reflects, “At one point there were upwards of 130 people coming through our apartment in a three-hour time slot, which was nuts, but really exciting.”

“It’s crazy how we built our entire business through social media on Facebook, Twitter and Yelp,” chuckles Nguyen.

This is where the story takes another unique turn. Friends of theirs owned a restaurant downtown that was unfortunately on the decline, while Starry Kitchen’s little underground idea was on the upswing. The friends approached Thi and Nguyen, and asked them to take it over while cutting them in as partners.

In order to convince Thi that this was a great idea, Nguyen told his wife to come up with the name, one that she would be proud and happy with.

He laughs, “My wife’s life is surrounded around Asian television, and the Starry Kitchen is the name of her favorite cooking show in Hong Kong, so she was sure that was it.”

The restaurant is located in a prime area of downtown near the Walt Disney Concert Hall, open Monday through Friday from 11 a.m. to 3 p.m. They get their biggest rush between 11:45 a.m. and 1: 30 p.m. with the line curling around the outside of the restaurant. It’s a two-toned, bright little spot that is in perfect contrast with a sometimes drab downtown.

“It’s bright like our personalities,” state Thi and Nguyen.

The menu at first may appear simple with only four proteins to choose from as well as your vessel (sandwich, salad or rice), along with a side. The recipes and flavors are anything but straightforward. They boast such dishes as their staple lemongrass chicken, braised coconut jackfruit, Malaysian chicken curry and Nebraska Angus Japanese meatball curry. The neat thing about their menu is that it always rotates; everything except for the lemongrass chicken has a two- to three-week lifespan before becoming the bye-bye dish of the week. Once it goes away, it doesn’t come back for two months.

Excitedly Nguyen states, “It keeps customers coming back and eager to see what new dish my Kitchen Ninja Wife will come up with!”

Their bread is amazing and absolutely top secret. I tried to unearth where they found this bread, but Nguyen gloated with secrecy that it took him two months to find it, so no way was he giving up that classified information.

After meeting the two of them, I was impressed by what a humble and dynamic duo they are. Nguyen is definitely the frontman with lots of personality, while Thi is the quintessential kitchen ninja creating new and exciting dishes.

They have great price points. You can eat an entire meal for $10 to $12, and their current menu is always listed on their blog!

Budget
The ECOLunchbox is an eco-friendly food storage solution for people on the go
2,009 views

Budget
Mexicali Taco & Co.: Everything But the Tacos
4,318 views

Budget
Tom Bergin's: "Where Everybody Knows Your Name"
2,655 views