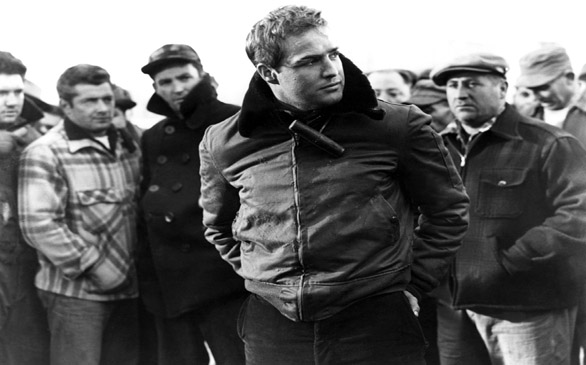 Marlon Brando said, “I coulda been a contender,” in On the Waterfront (1954).

As promised, here are the answers to the Screen Shots Movie Quiz I posted in last week’s column. Time to separate the suckers from the aficionados.

1) In the film The Good, the Bad and the Ugly directed by Sergio Leone, what is the name on the grave that the coveted stash box full of gold is buried in?

2) In the Coen Brothers-directed film Blood Simple, what is the character Loren Visser, played by M. Emmet Walsh, looking up at during the final scene of the film as he lies dying on the floor?

A) A crack in the ceiling

B) A ceiling fan

When Visser falls to the ground, he winds up with his head beneath a sink that comes out from the wall, and the final shot of the film is his POV looking up at the bottom. To this day I still ponder its meaning. Maybe it means something, or maybe it means nothing, but whatever it means, only the Coens know. And they’ll probably never tell.

3) How many times has Robert De Niro appeared in a film directed by Martin Scorsese?

4) During the production of which film was the studio completely at odds with almost all of the casting choices and on the verge of firing the director throughout the duration principle photography?

A) Lawrence of Arabia

The “powers that be” didn’t like the casting of Marlon Brando, Al Pacino or James Caan. And the story is that there was a replacement director on set every day standing by just in case they decided to fire Francis Ford Coppola. Too bad they didn’t, otherwise the film could’ve had a shot at being a classic.

5) In Sergio Leone’s The Man with No Name Trilogy, what is the name of Clint Eastwood’s character?

D) All of the above

E) It’s a trick question. He doesn’t have one.

If I nailed you with that one, don’t be ashamed. In A Fistful of Dollars, Eastwood is referred to as “Joe,” in For a Few Dollars More he’s called “Manco” and in The Good, the Bad and the Ugly it’s “Blondie.” The idea that he has no set name is probably where the “no name” thing came from.

6) What is the main reason Sonny Wortzik (played by Al Pacino) attempts to rob the bank in Dog Day Afternoon?

A) Revenge against the bank

B) To save his family from being homeless

C) To pay for his gay lover’s sex change surgery

D) To repay a debt to gangsters

What’s even better is that he also has a wife and children. Sonny Wortzik is one of my all-time favorite flawed, empathetic protagonists.

7) What is the profession that Jon Voight’s character “Joe Buck” pursues when he arrives in New York at the beginning of the film Midnight Cowboy?

Joe Buck arrives in New York with the dream of becoming a gigolo with absolutely no knowledge of the sex worker business. When he begins searching for other back alley criminals to guide him through the seedy underworld of New York, he meets the man who will change his life, Ratzo Rizzo, played by Dustin Hoffman.

8) How many films has Woody Allen written, directed and starred in?

The man is a filmmaking machine. Enough said.

9) What is the name of the villain who murders James Bond’s wife?

One of the biggest disappointments in film history is that this was the Bond film that Sean Connery chose not to do. Connery created the emotionally unavailable and untouchable paradigm for the Bond character that we all know and love, and to see him fall in love, quit the service and get married only to watch his brand new wife murdered in front of him would probably have been the greatest moment in the whole Bond series.

10) What actor delivers the line: “You don’t understand! I coulda had class. I coulda been a contender. I could’ve been somebody, instead of a bum, which is what I am.”