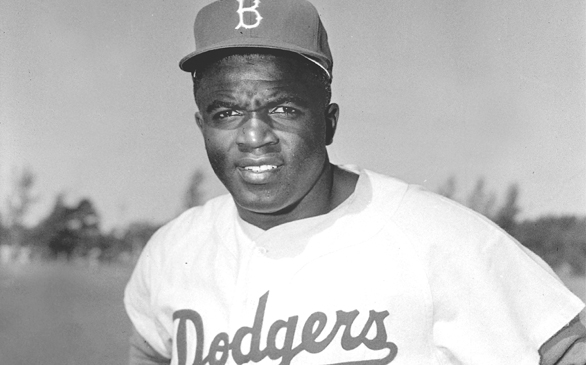 Major League Baseball tends to avoid taking political stances. "Just play the game" goes the mantra. Unless, of course, the political stance is one of devout patriotism. Hence, the singing of the national anthem before games or “God Bless America” during the seventh-inning stretch. On these occasions, we are asked to stand and honor our country.

Yet, there are some moments when more divisive political issues assert themselves onto the playing field and demand recognition. The occasion of Jackie Robinson’s appearance in a Brooklyn Dodgers uniform on April 15, 1947, was one such instance. It was a moment when the issue of prejudice was brought center stage, and the awareness of civil rights expanded.

Looking back, there are some who would argue that the desegregation of baseball could not have happened anywhere but in the borough of Brooklyn, a community of immigrants; Jews, Italians, Irish, Puerto Ricans and Southern blacks. They were people who understood firsthand the hardships of poverty and the importance of overcoming prejudice.

Dodger legend Don Newcombe, who pitched in those days, still tells stories of how the organization went out on a limb and the effect it had on Brooklyn. The team became a great unifying force in a community otherwise divided by race and class. There was a kind of blue-collar mystique to the club, the Everyman’s team fighting valiantly against the Giants of upper Manhattan or the big money New York Yankees. When the Dodgers, immigrants themselves, moved to Los Angeles in 1958, so came the mystique as fans packed the L.A. Coliseum to see the team of Robinson, Newcombe and Roy Campanella.

When Jewish pitching sensation Sandy Koufax refused to play on the High Holy Days of Rosh Hashana and Yom Kippur despite the heated pennant races of the ’60s, the Dodgers respectfully obliged and consequently secured a place in the hearts of Jewish baseball fans citywide. And then, of course, there was the phenomenon of Fernandomania, that explosion of excitement that swept the city in 1981 due to the performance of a 19-year-old Mexican immigrant who didn't speak a word of English named Fernando Valenzuela. One need only take a stroll around Dodger Stadium during any game and observe the number of fans wearing jerseys of Robinson, Koufax or Valenzuela to get a sense of the importance these names have for fans.

Aware of these sentiments, the organization continues to celebrate the Dodger icons. The annual Jackie Robinson Day (April 15), now observed by all of Major League Baseball, commemorates the integration of baseball and the triumph over prejudice.

The overt celebration of past civil rights gains by Major League organizations is troubling only when compared to the current “No Comment Policy” now assumed by MLB when asked about present-day civil rights issues. Perhaps the only team owner who has issued any public statement is Arizona Diamondbacks president Ken Kendrick, who says he personally opposes S.B. 1070, the recently-signed Arizona law that directs law enforcement officers to determine immigration status of individuals who are “reasonably suspect” to be illegal aliens. The law also makes it a state crime to be an undocumented resident. Fears of racial profiling and police abuse have sparked widespread concern among Latin Americans.

In the process, MLB has suddenly found itself the focus of a larger debate around the legitimacy of S.B. 1070. The spring training facilities of 15 major league clubs are located in Arizona. Currently 30 percent of all professional players are foreign-born, making many potential targets of suspicion.

Ozzie Guillen, the Venezuelan-born manager of the Chicago White Sox, whose team shares spring training facilities with the Dodgers in Glendale, Ariz., was recently asked how he would respond if questioned about his immigration status. The famously colorful skipper replied, “I’d tell ’em to f--k off!”

Guillen is not alone in his hostility toward the new law. In the weeks since the law’s passage, protests have occurred throughout the country. The Arizona Diamondbacks have become a target of protest wherever they play despite Kendrick’s stated opposition to the law.

The problem with Kendrick’s public stance is that it is contradicted by his activities as a major fundraiser for Arizona politicians in support of the measure. Furthermore, he has used Chase Field, the D-backs stadium funded by $250 million of taxpayers’ money, to conduct these fundraisers. What many see as hypocrisy has inspired demonstrations outside stadiums where the team is playing.

As the D-backs are due in Chavez Ravine this Monday, May 31, already so-called “Welcoming Committees” have formed over Facebook event pages called Boycott the Arizona Diamondbacks. The idea behind the demonstrations is to put pressure on Major League Baseball to take a stand against S.B. 1070. As one fan wrote on his page, “Dodger baseball is our religion and we can’t let [the D-backs] come without showing our opposition to this racist law.”