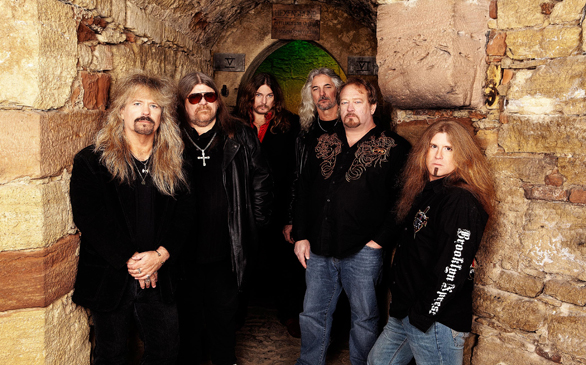 Lineup changes often bring about the death of a band, especially if the shift involves the lead singer. After having massive radio success with songs like “Whiskey Man” and “Flirtin’ with Disaster,” Molly Hatchet singer Danny Joe Brown quit in favor of less touring and a solo career. Jimmy Farrar then came on board, and another hit, “Beatin’ the Odds,” was added to the Hatchet legacy.

But then Southern rock fell out of favor, and the band tried playing straight rock, but that idea flopped. Brown’s return to the band didn’t help, and he quickly departed again and has since passed away.

After a lengthy hiatus, the band started releasing new music again several years ago, and their Southern rock sound, in style or not, is back in top form on Justice. Longtime fans who haven’t heard the band’s recent output will be pleasantly surprised by Justice as singer Phil McCormack, in a voice very suitable to take the torch from Brown and Farrar, sings about missing Jacksonville, the band’s hometown, on “Been to Heaven, Been to Hell,” about party-loving Southern girls on “American Pride” and about getting out of a relationship while there’s still time on the Outlaws-like “I’m Gonna Live ’Til I Die.”

Mix in the guitar work of original member Dave Hlubek and slide player Bobby Ingram, and you’ve got the classic Hatchet sound. Other than Lynyrd Skynyrd, Molly Hatchet was the biggest band working during the Southern rock heyday, and it’s good to once again be able to hear fresh music done in that very distinct style.