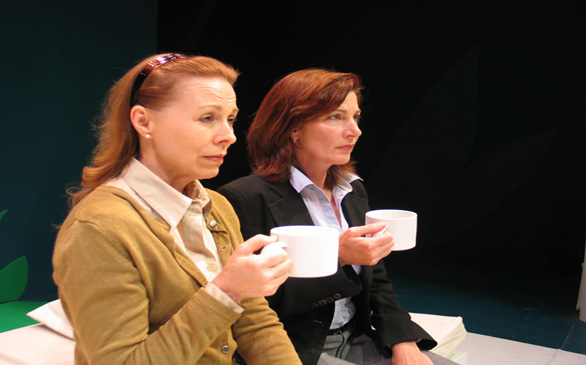 “The Clean House” is the latest production staged at the Odyssey Theatre, written by Pulitzer Prize nominee Sarah Ruhl and directed by Stefan Kruck. Two doctors, Charles (played by Don Fischer) and Lane (played brilliantly by Colette Kilroy), hire a Brazilian woman named Matilde to clean their home. Matilde (played by Elizabeth Liang) despises cleaning. Her goal in life is to be a comedian and come up with the perfect joke.

Lucky for Matilde, Lane’s sister Virginia, played flawlessly by D.J. Harner, loves to clean. She lives for cleanliness and order! Lane’s life begins to crumble when her husband falls head over heels, impractically in love with his Argentinean patient Ana, played by Denise Blasor. Chaos ensues.

The “The Clean House” script feels outdated and a bit morbid. Although there are a few notable performances, by Harner and Kilroy – who are absolutely wonderful and believable (They stole the show.) – the rest of the cast is unimpressive. Liang’s Matilde lacks genuine wit and charm. She is not the funny character I really wanted her to be. Blasor’s Ana is overdone, and Fischer’s Charles tries a bit too hard.

The set design by Frederica Nascimento complements the story, but it feels at times cramped, particularly when the characters are on the balcony overlooking the sea.

I love farcical theater when it is done well and flows effortlessly. It is wonderful to watch because it takes the audience on an erratic whirlwind of hysterical schemes. A big part of that comes from the actors themselves believing their characters’ individual circumstances to be absolutely true. That’s what makes it funny. This show is missing a lot of that. I regretfully missed the punch line.