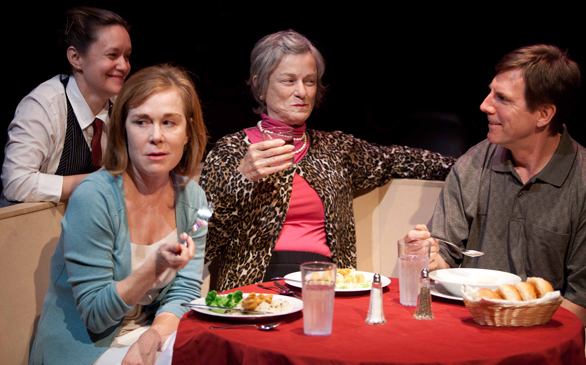 “Four Places,” written by Joel Drake Johnson and directed by Robin Larsen, is about life. Not the amazing joyous-freedom-ecstasy-filled kind of life, but the type that scares and awaits most people. It reminds us that suffering, old age, the nausea of a family’s chronic problems and death are upon us.

The story – because theater that attempts to hold a mirror to reality does have episodes – centers around a septuagenarian mother and her two adult children who go to lunch. But that’s not really the story. The story is that they each have great trouble in their lives.

Anne Gee Byrd, as the elderly Peggy, has great trouble in her marriage; she’s been trying to murder her husband. Tim Bagley, as her troubled son Warren, has been a brewing mess for what appears to be his whole life – and it’s beginning to seep through. The other girl in the family, Ellen, played by Roxanne Hart, is a psychologist and appears to have found ways to cope with life’s massive pains. We never meet the father, but I’m sure that’s OK.

The characters in “Four Places” and their issues are familiar to just about everyone – we know these people from their roles in our lives (e.g. parents, bartenders, mailmen, etc.) whose very presence forces our rapport. Such is the case with the intrusive waitress Barb, rendered by Lisa Rothschiller, who persists in bringing Peggy drink after drink and uses her service position as a passport for unceasing nosiness.

This is the type of play that capitalizes on ripened actors to convey the drama of everyday adult life. At times, a facial expression like Warren’s as he drifts off somewhere into his imagination while Ellen drives is far more telling than what he could say on the monotony of life. This is a serious play that can sum up years of endurance by using a sarcophagus-like expression upon one’s face – maintain your composure as you decompose – that looks as though the slightest crack might let out dust.