The Wolfman, Mystery Team and More 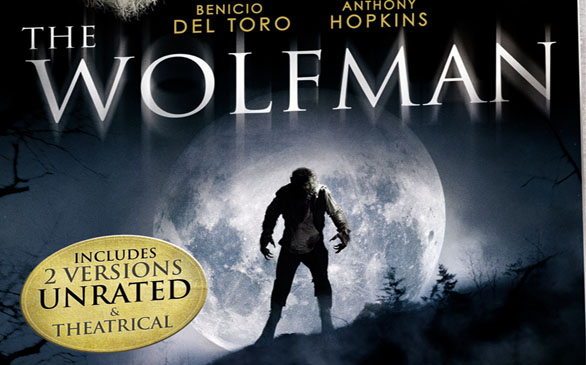 Benicio Del Toro and Anthony Hopkins star in the stylish update of the Universal horror classic The Wolfman. A man returns home after his brother is killed by a werewolf, only to be bitten and turned into one himself. The makeup effects are terrific. Hugo Weaving and Emily Blunt round out the cast.

The classic TV Western The Virginian: The Complete First Season is available on DVD for the first time. Premiering in 1962, the ambitious and long-running series comes remastered and in a collectable tin case.

HBO’s hit vampire series “True Blood” returns for the Complete Second Season. This original series from Alan Ball (“Six Feet Under”) takes place in a world where vampires have come out of the coffin and into mainstream society. Now, Sookie Stackhouse (Anna Paquin) has fallen for one of them.

Benjamin Bratt returns in the second and Final Season of “The Cleaner.” Bratt stars as a reformed addict who turns his life around as an extreme interventionist.

A tense cop drama, “Flashpoint” follows an elite law enforcement squad specializing in psychology brought in to solve the crises the regular cops can’t, from rescuing hostages to talking down suicides. The Second Season is now available.

Premiering in 1979, “Minder” was a long-running hit with British audiences. The series follows Arthur Daley (George Cole), a small-time conman and used car salesman who hires Terry (Dennis Waterman), a former boxer to be his bodyguard, meanwhile exploiting him at every turn. Season One is now available.

Set during WWII, “Manhunt” follows a British officer shot down in occupied France, who teams up with a resistance leader to help a young woman with important information escape her Nazi pursuers. This seven-disc set contains the entirety of this great adventure series.

Film historian Richard Schickel helmed The Eastwood Factor, an intimate look at the career of the living legend. This extended version features Eastwood talking with his typical self-effacing candor about his amazingly prolific career at Warner Bros. Morgan Freeman narrates.

John Lennon: Rare and Unseen culls long-forgotten TV footage from throughout the legendary Beatle’s career. Available on DVD for the first time, it’s a must-have for Beatles addicts clamoring for their next fix.

A no-nonsense culinary teacher turns around an inner-city classroom in the inspiring Pressure Cooker.

One of the funniest comedians working today, David Cross is also one of the few to take on issues on the scale of the late George Carlin. Now, after a five-year break, Cross returns with a new stand-up special Bigger and Blackerer.

DERRICK Comedy, the Internet comedy sensation, is behind the absurdly funny Mystery Team. Three nerds, members of a childhood detective team, now 18 and still at it, find themselves in over their heads investigating a murder. Donald Glover (“Community”) and Aubrey Plaza (“Parks and Recreation”) star.

Vegas hit Jeff Dunham made ventriloquism cool again. Now he’s got his own Comedy Central special, The Jeff Dunham Show. Dunham brings his puppet creations out into the real world, visiting a firing range and joining the marines.

Paul Bettany and Dennis Quaid star in Legion, an apocalyptic CGI spectacle. Led by the archangel Michael, a group of strangers must protect a waitress and her fated unborn child from an onslaught of demons bent on bringing about the Rapture.