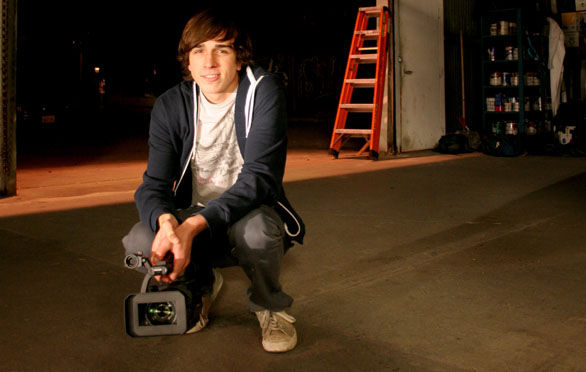 Seldom do you come across someone who is actively fulfilling a dream they’ve had since the sixth grade. Unlike those who stumble into film later in life, student filmmaker and producer Kevin M. Slee has always known what he wanted to do.

Slee recalls having his dad film him running around and playing when he was about 7.

In the sixth grade, Slee was part of a school project that solidified his decision to pursue film. He was assigned to do a crash study on a subject of his choice, and he naturally chose producing. Slee studied Brian Grazer (Robin Hood, Angels & Demons) and other producers.

From then on, Slee focused on becoming a producer and director.

“Ideally, I’d like to do both,” Slee says. “Ever since I was a little kid, I’ve loved actors. I’ve done a little of that, and it’s not really my thing. I really want to direct. I love telling a story. And I also love helping people tell their stories.”

Some time ago, Slee found his first subject.

“I started making movies with my friend Alex. We’d make surf documentaries. And that kind of morphed into making short films,” says Slee. “That’s how the networking began.”

Slee is currently a film production and political science major at Chapman University. In fact, Slee is double majoring, not so that he has a back-up plan, but to take full advantage of his courses since he has the time to major in both.

“As a filmmaker, learning about any other study helps,” says Slee.

He sees having another field of expertise only as a way to enrich his film endeavors. He has no plans to go into a political science-related field.

Slee moved around a lot when he was younger. He’s lived in New York, Oregon, New Hampshire, Minnesota and California since the second grade.

Neither of Slee’s parents is involved in the entertainment industry.

At Chapman, Slee appreciates the hands-on experience he has received so far.

“The school has forced me to follow deadlines. My freshman year I made six short films. I really am very thankful,” says Slee. “I’ve assembled this whole network through the film school.”

He now runs his own company, Artistic Analogies Film Co.

With his company, Slee is currently working on quite a few projects.

Slee recently wrapped My Friend Johnny Keller, which he wrote. He also just got the rights to Stephen King’s Grey Matter. He will be collaborating with David Foster (The Thing, The Mask of Zorro) on a few new projects as well. The two are currently working on a prequel of the same name to The Thing (2011).

Almost completed is his film, Dispatch. The crew is currently in post-production with the film and expects to complete the film this month. They shot the film last spring in 18 days.

Dispatch is a noir thriller set in a Hollywood limousine dispatch office. The film depicts one night in the life of an overnight dispatcher. As he does his job of coordinating celebrity clients and their chauffeurs, he must also confront major problems in his personal life. Dispatch is based on the experience of its creators, Michael Bershad and Steven Sprung.

Sprung met Bershad in one of his first jobs in Hollywood: the dispatch office. One momentous day, Bershad revealed story after story for hours on end. Sprung rigorously took notes and began to craft the tale of Dispatch. Certain characters and events were combined to make each character diverse.

“It gives the audience a sense of being in this world that is very unique and new,” says Slee.

Slee is continuing to build his resume and add credits for writing, producing and directing.