Splice: You can’t keep a good hybrid down. 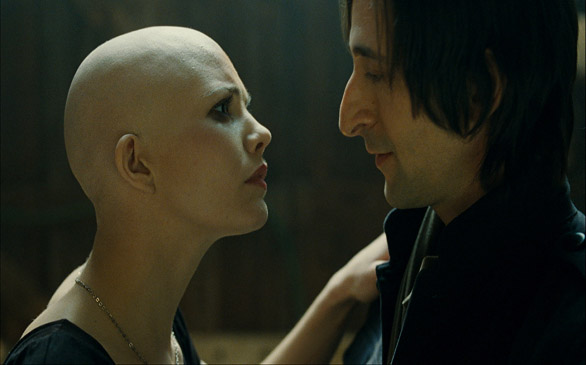 With scientific discovery comes the need for ethical supervision. Great minds may have the ability to create and disassemble, but they are not infallible. As a result, governing boards are often put into place to ensure that ethics and fair play are always upheld within the realm of science. This is the only way to protect humanity. Splice shows what happens when ethics fly out the window.

In the thriller, two young and hip genetic engineers named Clive (Academy Award winner Adrien Brody) and Elsa (Sarah Polley) are the toast of the scientific community. Their most recent creation is a set of hybrid life forms that they made with the DNA of numerous animals. Not satisfied with the success that they’ve achieved, Elsa (the more headstrong of the two) decides that it would be interesting to take things to the next level. She wants to incorporate human DNA into the mix so that the duo can solidify its place at the top of the genetic engineering food chain. Unfortunately, Clive (the pragmatic one) isn’t so sure. Although he initially puts up a fight, he finally gives into Elsa’s whim and injects their last hybrid embryo with the genetic matter of an unknown female donor. Then, they wait.

Soon after, their creation hatches. She’s a bizarre, bird-like creature with human and reptilian traits. She also behaves much differently than Clive and Elsa’s other hybrids by exhibiting violent tendencies, which leads her creators to believe that the form is somehow in pain. Clive and Elsa struggle with the decision to let the beast live or to put it out of its misery. But as scientists, they choose to ride the wave and see where this discovery takes them. They name the being Dren (“nerd,” backwards). As she grows, the two scientists develop very different attachments to her. Elsa becomes maternal. Clive becomes resentful. However, Dren is an anomaly to them both. She is exponentially smarter and more evolved than they imagined. However, as Dren begins to take on more human traits and patterns of behavior, Elsa and Clive start to break under the crush of their own discovery. Not only does the new hybrid threaten their relationship with one another, but she just might be the bane of human existence as well.

Splice is a unique and deceptive thriller. It’s not the gore-fest that horror fans may be expecting. In many ways, it’s so much more. Splice pays homage to the best from every film genre imaginable: It has the style of foreign and new wave films with the biting wit of a dark comedy. It’s spookier than anything Alfred Hitchcock or David Cronenberg ever did and wilder than every Russ Meyer, John Waters and Roger Corman flick ever created. Like the Dren character it depicts, Splice is itself the perfect hybrid.

The mastermind behind the movie is Canadian director Vincenzo Natali (Cube). Splice is Natali’s labor of love. It took him nearly a decade to finally bring it to the big screen. Along the way, one of his major concerns was the speed in which modern science has progressed. He was worried that his film would be eclipsed by the real world.

“The technology is advancing so rapidly, I think it took scientists less time to map the human genome than it took to write the script,” he jokes. “How does Splice fit in to the world we live in now? I don’t even know what world that is. I don’t think anyone does. Things are changing in dramatic ways in all aspects of our civilization, culture and science, and that’s something Splice explores: our relationship to technology and the doors it unlocks. It pushes us to places we’re unable, or afraid to go.”

“What takes place in this movie is not far from the truth,” he says. “We’re living in a world in which science fiction is becoming reality and that gives the film its weight. It’s frightening to a certain extent, to see how precarious things can be, but also exciting because there is potential for wonderful things.”

Since its premiere at the 2010 Sundance Film Festival, Splice has been garnering a ton of attention from critics and moviegoers. Its plot twists and turns are unexpected and like nothing that anyone has ever seen before. One person who was impressed by the movie is Joel Silver. He’s the mega-producer behind movies such as The Matrix and 2009’s Orphan. Silver was perusing the trade papers when he happened upon a tiny still shot of the movie. He requested a copy and screened it. Instantly, he was hooked.

“I think the way Vincenzo did it is fresh and unusual,” he says of the Frankenstein-like tale.

For newcomer Delphine Chanéac, Splice was not only the opportunity to break into the mainstream, but it really gave her the chance to explore a “grossly” physical role. She stars as Dren. Her herky-jerky movements and wide-eyed expressions are the impetus for all of the drama that unravels among the characters.

“It took a great deal of concentration to play because of the extra physical demands,” she explains.

Chanéac did all of her own stunts, which includes soaring through the air, lunging at prey as well as creeping through a barn like modern-day version of “The Kids in the Hall”’s Chicken Lady.

The special effects team utilized a ratio of 70 percent Chanéac/30 percent computer graphics to assist the actress’s odd performance. They set her eyes apart further than normal in a regular human being. They also gave her a bald cap and made great use of her delicate features and small face. For the younger incarnation of Dren, the FX team called upon an even split of live action juxtaposed against the savvy of CG. Child actress Abigail Chu became audiences’ first real view of the hybrid, Dren. Even Chanéac found her tiny counterpart extremely helpful in her depiction.

“We played back Abigail’s scenes to Delphine and recorded her visual reactions as if she were the child Dren and then, using technology, translated that into data that became the digital model,” notes Natali. “It’s a subtle thing, but it helps give the character continuity.”

Although she is the creature that science and mankind fears, Dren is ultimately like the time-honored monster created by another mad scientist, Dr. Frankenstein. She doesn’t know her own strength, and due to her bizarre intellectual makeup, she is not aware of her own strangeness. Chanéac felt a sense of empathy for her character, one that she was able to embody and bring to the set with alarming clarity.

“Dren wants to love and to be loved, but is kept at a distance because she is not normal. She’s quite sensitive and pure, like a child, yet very aggressive at the same time. She can do and feel what she wants to,” admits the actress.

Part of Dren’s need to be loved is explored, quite graphically within Splice. In two of the most provocative and frightening scenes in the movie, Elsa and Clive’s hybrid displays a terrifying sexual nature that has made some people laugh and others cringe from the shock and terror of it all.

Brody can joke about his outrageous and jaw-dropping scene with Chanéac, which takes place on the floor of a barn.

“The splinters were a big enough threat,” he jokes, adding, “I think all of these characters fell into temptation. [Clive] made a choice, and when you make a choice, you have to deal with it.”

As for Polley’s character in the movie, her interaction with Dren soon turns sinister and ugly. The Canadian actress found her scenes difficult to play.

“It was awful,” she says of shooting the onscreen violation she suffers at the hands of her fictitious creation.

While she felt fortunate that she was able to act opposite Chanéac (who portrays Dren in male form as well), she contends that it was no less upsetting to imagine the fear that her character would have felt in real life. Still, Polley felt protected by her director. She and Natali got along famously, due, in part, to his easy nature on set.

“I think one of the things I was surprised about with Vincenzo is how good he is with actors,” she says.

As for whether or not he feels that Clive and Elsa were right or wrong in Splice, Brody is diplomatic.

“There are a lot of groups that need to be considered, here,” he says. “We need scientific research, but with that comes a huge responsibility. It’s a very complex issue, and I really can’t distill it into a couple of sentences.”

But when asked about the overall storyline, Brody can summarize that with a bit more ease and ribald humor:

“It’s fucked,” he exclaims, before bursting into laughter.