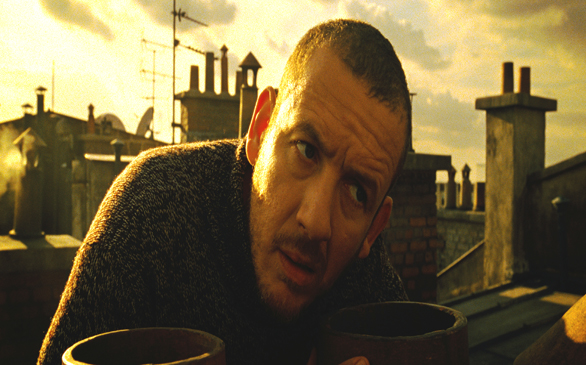 There are few directors who can make your dad stepping on a land mine and then getting shot in the head 30 years later look like fun, but director Jean-Pierre Jeunet manages to make it look downright easy.

Back on his game (after the rather unfortunate A Very Long Engagement), Jeunet returns to his signature style with Micmacs. In this madcap caper, Bazil (Dany Boon) is a video store clerk orphaned 30 years earlier when his minesweeper father was killed by a mine in the field. Bazil lives a comfortable life, with nights spent mouthing the lines to all the old movies while he watches the store. That is, until a stray bullet from a drive by lodges in his head, and Bazil wakes up to find he’s lost his apartment and his job while he was recovering in the hospital.

When Bazil finds the weapon manufacturers who made the mine that killed his father and the bullet that remains in his head, he sets out to pit them against each other and bring them both down with the help of the ragtag team of scavengers who adopted him into their junkyard family.

The cast of very colorful characters (including some Jeunet regulars like Dominique Pinon and Yolande Moreau) showcases personalities who are as entertaining as their antics. There are scavengers, Calculette, who can calculate pretty much anything in less time than you can say “calculator,” Petit Pierre, the naïve artist whose metal sculptures are also machines and la Môme Caoutchouc, who can bend herself into tiny spaces (like the place in a refrigerator where the crisper drawers should be), and one of the evil arms manufacturers collects body parts from famous politicians and actors. Strange? Yes. But then again, this is just true Jeunet syle. I mean, think about the diver/clones in City of Lost Children.

And in true Jeunet style, Micmacs is a fast-paced comedy that takes you through a series of feints and ruses that are both revealing of each character’s quirks and just crazy enough to work. In fact, the film is a thoughtful, creative combination of Amélie and Delicatessen that doesn’t takes itself too seriously but still makes you think.