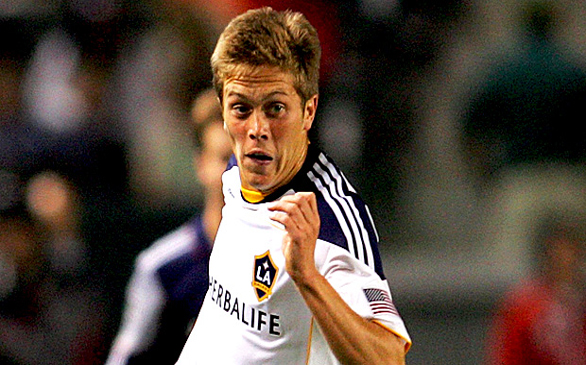 No Landon Donovan. No Edson Buddle. No problem. A pair of young guns led the Los Angeles Galaxy in their 2-0 road victory against the Crew in Columbus, Ohio, Saturday, May 29.

With the shutout win, Los Angeles improves to 9-0-2 for the season; their total of 29 points is the best mark in the MLS as they currently sit atop the Western Conference. The Galaxy, who have a shutout streak of 456 minutes, are the only unbeaten team left.

Midfielder Michael Stephens, 21, tallied the visitor’s first goal in the 11th minute off a Chris Birchall pass. Stephens trapped the ball outside of the goalkeeper box and then fired a well-placed, right-footed shot into the back of the net. Birchall registered the assist.

“It’s a huge win for us to get it on the road against an undefeated team,” Stephens says to MLSsoccer.com. “They’re not in our conference, but it’s still a very important win for us, and it keeps us unbeaten.”

Four minutes after the initial score, the Crew blazed right back when forward Steven Lenhart managed a header past the opponent’s defense. However, Galaxy goalkeeper Donovan Ricketts made an incredible acrobatic save. Ricketts went on to make another pivotal stop in the 29th minute as Guillermo Schelotto’s direct free kick squeezed past the Los Angeles’ wall.

Columbus controlled the tempo of the match for most of the second half, but the Galaxy did not succumb to that style. In fact, 19-year-old forward Tristan Bowen finished off the affair after connecting on a left-footed shot off a Chris Klein pass. Bowen one-timed his kick from atop of the 18-yard box. Klein recorded the assist.

Both Donovan and Buddle did not play because they are in South Africa with the U.S. national soccer team for the World Cup. Los Angeles returns to the Home Depot Center Saturday, June 5, to face the Houston Dynamo at 5 p.m.