The Shannon Twins: Life After the Mansion 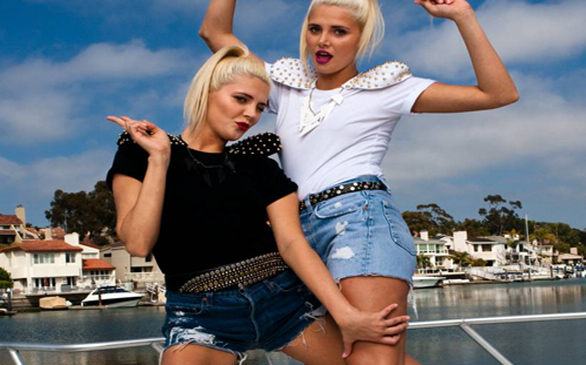 The Shannon twins, Karissa and Kristina, have been doing a lot of bouncing around after their departure from the Playboy Mansion and their E! series, “The Girls Next Door.” Now that they’re no longer next door to the playmate house, they’ve each moved in with their new significant others.

Karissa met her boyfriend, Sam Jones III, at a New Year’s party at the mansion. Jones is best known for his role on “Smallville” and his current show “Blue Mountain State” on Spike TV. While Karissa’s relationship with Jones is a little more public, Kristina isn’t dishing out much about her beau.

“His name is Mark, and he’s a perfect guy,” says Kristina.

Both girls seem happy with the decision to move in with their boyfriends. They left the mansion with no regrets.

“It was good at the time, but I didn’t want it to last forever. We wanted to branch off and do our own thing and move forward,” says Karissa.

Both are still on great terms with their ex, Hugh Hefner, though.

According to Karissa, “He’s still there for me. If we wanted to move back in we could. It was our decision to move out.”

Kristina says she stops by the mansion anytime just to say hi, get mail or even have movie night.

“Me and Hef will always have a good relationship,” says Kristina.

The twins not only have new men but new roles in Sofia Coppola’s upcoming film, Somewhere, starring Stephen Dorff and Elle Fanning. Benicio Del Toro, Michelle Monaghan and Laura Ramsey also star in the film. Coppola serves as the writer, producer and director.

Somewhere is a dramedy about an A-list actor (Dorff) living in the famed Chateau Marmont Hotel in Hollywood. An unexpected visit from his 11-year-old daughter (Fanning) forces him to re-examine his unhealthy celebrity lifestyle. Somewhere is set to release in the U.S. in December of this year.

Karissa’s character is Cindy, and Kristina plays Bambi. The twins can’t reveal too much about their roles in the film, but they’re both excited for their film debut.

“We have a couple hot scenes in the movie,” says Kristina.

They enjoyed the filming process and hope this is only the beginning for their film careers.

“It was really fun. We definitely want to get into more movies,” Karissa adds.

Even though there were many seasoned actors on set, the girls weren’t intimidated.

“Stephen made me feel very comfortable and Sofia, too,” shares Kristina.

Karissa and Kristina are both hoping for more film roles and would also like to experiment with directing in the future. The twins aren’t opposed to going solo for a film, either.

“We love doing stuff together, but we also want to do more independent stuff, especially as we get older,” says Karissa.

Karissa continues that she and her sister have totally different personalities. “There’s certain roles I think I could play [that] she might not even be interested in. I’m more girly, kind of more funny and silly. She’s more serious and a tomboy,” explains Karissa.

One thing they’re both interested in, though, is comedy.

“I would love to do a movie with Adam Sandler, and I love the roles that Cameron Diaz takes. They’re so fun,” says Kristina.

She also looks up to Seth Rogen as a comedian, gushing, “He’s hilarious.”

Kristina and Karissa have also been keeping busy taping a new pilot called “Bunnies Next Door.” The show is a spin-off of “The Girls Next Door” and features all the bunnies from the Bunny House. They’re still waiting for word on whether or not the show will be picked up.

The twins still make club appearances as “The Girls Next Door,” but don’t know at the moment what role they will play in the future with Playboy.

The former bunny twins’ future holds a few uncertainties, but they are definitely embracing the fast-paced changes. They’re both ready to take on the film world and also anticipate auditioning for TV shows.