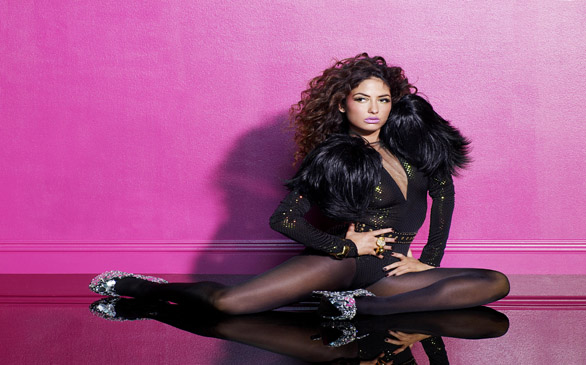 Here’s an offer you can’t refuse: Fast-rising British pop star Lolene is inviting you to make a reservation to visit her at The Elektric Hotel, which happens to be the name of her forthcoming album. The album’s release, scheduled for an as-yet-unnamed date in August, comes on the heels of “Sexy People,” her first-ever single that was a big dance hit last year.

“I’m so excited to release The Elektric Hotel and to invite the world into the hotel as my guests to enjoy my music,” says Lolene. “Drinks on me!”

Lolene got her start in her native Bristol, England, writing songs and singing backing vocals for Martina Topley-Bird and drum-and-bass pioneer Roni Size, but it was a move to Hollywood with demo in hand that eventually led her to a contract with EMI. If you can’t wait until August to check into The Elektric Hotel, you can preview a room now: Visit Lolenemusic.com for a free download of the album’s first single, “Rich (Fake It Til You Make It).”

URB.com and MixMatchMusic are having a remix contest in conjunction with this year’s Camp Bisco Music & Arts Festival. The Disco Biscuits are the masterminds behind and the hosts of Camp Bisco 9, to be held in Mariaville, N.Y. (outside Albany), July 15 through 17.

The winner of the contest receives a one-hour DJ performance slot, joining about 50 other acts, including Wu Massacre, Ween, Thievery Corporation, LCD Soundsystem and, of course, the Disco Biscuits. Entrants need to use the Remix Wizard from MixMatchMusic to work their magic on cuts from the Biscuits, Bassnectar, King Britt and the Black Seeds and then upload the remixes for judging by their peers and the general public. Details at URB.com; contest ends June 21.

Legendary guitarist Slash will be honored at the third annual Sunset Strip Music Festival happening Aug. 26 to 28 in West Hollywood. A tribute to Slash will be held at the House of Blues Aug. 26, and the former Guns N’ Roses star is thrilled to be this year’s honoree.

“I am sincerely overwhelmed to be the recipient of the Sunset Strip Music Festival honors,” Slash says. “The Strip and West Hollywood have been my stomping grounds since I was a little kid. I grew up in and around the music scene here. It’s where I got my start and where I still feel most at home. Thank you so much!”

Cat Club, the Key Club, the House of Blues, the Roxy Theatre, the Viper Room and the Whisky A Go-Go will all host SSMF shows on Aug. 27 and Aug. 28, and the city of West Hollywood is declaring Aug. 26 to be “Slash Day.”

And we’re not going to name him here, either. But HeWhoCanNotBeNamed, the mask-wearing guitarist for punk legends the Dwarves, has a solo album coming called Sunday School Massacre. In typical punk rock fashion, the mystery man explains his inspiration for “Machine Boy,” one of the album’s more interesting tracks.

“There was this kid that I worked with when I was a counselor. He was about 13 when I knew him, and he had some serious physical disabilities because his mom’s boyfriend had beat the shit out of him when he was an infant. His hands were gnarled, his spine was out of alignment, he wore big thick glasses and he regularly shit his pants so he had to wear diapers.”

“Sine Language” is the new single from the Crystal Method, and the band is holding a contest to find the fan who can make the best video for the song. Green screen stems are provided for entrants. Find them and entry details at thecrystalmethod.com/sinelanguage.