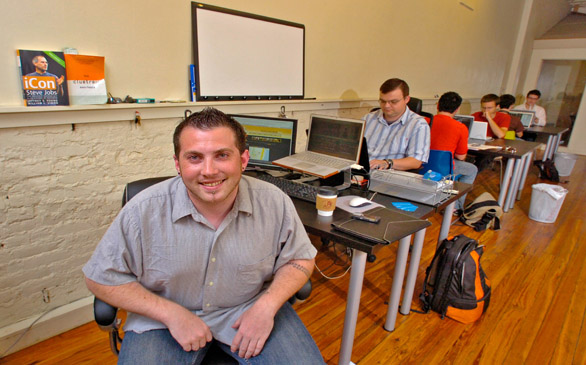 Recent grads are launching their own companies with a little elbow grease and a few hundred dollars.
(Credit: Clem Murray/Philadelphia Inquirer/MCT)

The class of 2010 has endured four years of heaven – or for some, hell. They’ve experienced dorm life, campus food, keggers, rush week, pledging, audits, parking woes, football games, sex, drugs, rock ’n’ roll, hip-hop and the worst unemployment rates in nearly 26 years. The scholastic landscape has seen its ups and downs as well: A number of colleges and universities have expressed concern over the small number of minority graduates, including Hispanics, who are the fastest-growing section of the population. Even medical school grads (once thought to have a lock on employment) are feeling the pinch, with many doctors around the country announcing that their practices are crumbling under the immense pressures of a bad economy. So many recent grads will become unnamed statistics in a world spiraling out of fiscal control. Welcome Class of 2010: This is your future.

For students, landing a six-figure salary is at the top of their wish lists, but most don’t know how to obtain such a fate. College recruitment efforts at some companies are at an unfortunate standstill, which means the recent grad needs to explore many opportunities on their own time and dime. A number of former students have begun to get inventive, adopting Ferris Bueller-type tactics to make good use of their newly gained academic freedom.

“I went to a life coach,” says Anna Christou.

Christou recently married her college sweetheart and says that her husband was the one to encourage her to find her bliss.

“At [Academy of Art], we were really focused on art and design,” she explains. “But the jobs just aren’t there the way I thought they’d be.”

So, she scoured the Internet and found a life coach who has helped her pick up where her mom and dad left off.

“We just talk about where I want to be in life, and she helps me with practical ways of getting there. I do a lot of creative visualization. I focus on the good stuff and spend less time obsessing over the disappointments,” says Christou.

For others, it’s less about the metaphysical pursuits and more about doing something awesome for the environment and for those less fortunate. Idealist.org is an organization that promotes volunteerism across the planet. The site aggregates information about everything ranging from internships to fundraising campaigns that need your helping hands, money or other resources. To date, Idealist.org lists nearly 19,000 volunteer opportunities throughout Europe, Asia, Africa, North America and the Pacific, including Australia. Registration is free.

A growing trend among recent graduates is entrepreneurship. The Internet boom of the 1990s has given way to a new wave of men and women starting computer- and home-based companies. This time, there is a focus toward “the mom and pop” business model, as opposed to seeking corporate-sponsored revenue or venture capital. Between 2007 and 2008, Internet giant eBay saw its number of online registrations jump a whopping 51 percent. This is due, in part, to an increase in online merchants selling products and services to its built-in customer base. Companies such as GoDaddy.com and Yahoo may have recently announced an increase in their domain name acquisition fees, but this has not thwarted the public. A new company can be started in just a few quick steps:

1) Choose a name and register it online.

2) Set up a corporation, LLC (limited liability company) and/or dba (“doing business as”).

4) Scout a great business location (or work from home).

Unlike the 20th century, when start-up capital was all the rage, a new company can be founded with a little elbow grease and a few hundred dollars. And since the most valuable demographic in e-commerce is the 18- to 34-year-old market (in which students and graduates fall), a simple notion could easily turn a recent graduate into the next big captain of industry.

Remember, a life is only worth living when it’s lived to the fullest. No one expects any of us to have it figured out just because there’s a diploma on the wall. So strike out and find your place in this world. Years from now, you’ll be happy that you did.