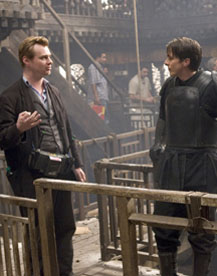 Batman has been through a lot. Beyond his parents being murdered and being beaten up by a host of villains, the character has been torn apart by an endless series of media incarnations. Finally, someone got it right.

"It’s a whole new thing, in a whole new way," says Michael Caine, who portrays Alfred, Bruce Wayne’s butler and confidante, in Batman Begins. This version is more true to the spirit of recent comics than previous films. Each of those films approached the world of Gotham City from a highly stylized perspective, whereas in this film director Christopher Nolan opts to create a mostly realistic world for Batman to perform his extraordinary acts.

"We designed the city like a real city, we wanted to give it a sense of history, we drew from New York, Chicago, Hong Kong – Gotham needed to feel real," explains Nolan.

Unlike other summer mega films, Batman Begins boasts an extraordinary cast. In the all-important role of Batman is Christian Bale, who explains that he feels he had to play three parts, not just one.

"To represent his journey, we needed to portray three distinct facets of [Batman’s] character: Batman, the private Bruce Wayne and the public Bruce Wayne, a spoiled playboy and the last person anyone would suspect of caring about the city’s decline," says Bale.

The film balances these three parts carefully, and tells a story not of a superhero, but of a man. Not of Batman, but of Bruce Wayne and his struggle to come to terms with the world in which he lives.

"The public Bruce is just as much of a mask as the mask that Batman wears," adds Bale, who, in preparation for the role, trained as hard as his character does in the film to become Batman. "I gained 110 pounds in five months. I’m not sure how healthy that is," says Bale with a laugh. Coupling that with long days spent inside a rubber suit under hot lights, one begins to see that Bale lives up to his reputation as one of the most focused and committed actors in Hollywood.

Joining Bale in Begins are Caine, Gary Oldman and Morgan Freeman, who aid Wayne in his quest to rid Gotham’s streets of the darkness that pervades it. Rounding out the all-star cast are Liam Neeson, Cillian Murphy and Ken Watanabe as the film’s cadre of villains – they’re all superhuman, although each of them manages to come across as surprisingly believable. Katie Holmes, who doubles as Wayne’s conscience in the film, appears as the quintessential cute girl who viewers have no choice but to root for.

The film’s story line recounts the time period in which Wayne creates the Batman character, something not seen in the earlier films. The film uses the character’s vast background to its full potential, pulling the crème de le crème from the graphic novels.

"We had 64 years of material to pull from. We took pieces from a number of books," notes screenwriter David S. Goyer. "In some cases, we took dialogue directly from a panel on the page."

Because it was essentially reinventing the franchise, the filmmakers were able to take liberties with the story that others have not been able to, such as placing characters in situations that fans may not expect and then guiding them to familiar positions by the end of the movie. In that way, this movie operates as not only an origin for Batman, but for his allies as well.

The film has no shortage of symbolic dichotomies, inviting viewers to ask questions of themselves and their world. "The only superpower that Batman has is the Wayne fortune," explains Bale. "It’s interesting to see the way that plays out in this story." That fortune allows him to procure some of the coolest gadgets on earth for his crime fighting use.

Themes of economics, fear and absolute morality are prevalent throughout, pushing this film far more into the thinking-mans category than most comic book films. Even for those not interested in the philosophical implications of murder, the Batmobile should be worth the price of admission.

Batman Begins is currently in theaters.