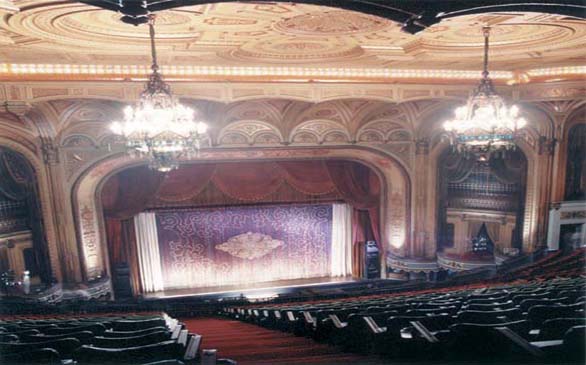 New York City brags endlessly about their beloved Broadway, and I’m getting pretty sick of it. Sure, the talent runs rampant on the street of the city’s theater district, but it must also share the gutter with snotty theater critics and enthusiasts who (though they can’t sing, dance or act), do the next best thing: admire.

Well, we may not have the best live theater performances in the country, but we have something we are proud of, too. Angelenos can boast that Los Angeles’s Broadway theater district is comprised of the largest concentration of pre-World War II movie palaces in America. Running through downtown, Broadway’s motion picture theaters date back to the 1920s. Many began as vaudeville stages where the likes of the Marx Brothers entertained those who could afford it. When a little thing called film came along, the lavish temples were turned into movie theaters for an era of Depression-ridden moviegoers.

At one time, the theaters were lauded for their plush velvet seats, eccentric chandeliers and rococo designs that, all together, gave the sense that movies were meant for both royalty and the middle class. However, when Sid Grauman opened the Egyptian Theatre in Hollywood, a shift occurred that cannot be attributed to earthquakes. Hollywood was now home to malls and multiplexes, making it less convenient for people to make the hike to downtown.

Which is why New York’s Broadway is so superior to our own. The former film mecca of Los Angeles is now a handful of ill-treated, rundown theaters lined on dirty sidewalks and neighbored by Skid Row.

Los Angeles Conservancy is taking action to spread awareness about the demise of these theaters in the hopes of inspiring a renaissance of film in downtown. The Last Remaining Seats 2010 series is running every Wednesday from now through June 30 in Broadway’s historic theater district, which is the first and largest theater district listed in the National Register of Historic Places.

This summer series of six screenings is, for once, much more about the venue than about the films because many of these theaters are not normally open to the general public. It began in 1987 as a way to raise awareness about the neglected theaters and has turned into a summer tradition of showing classic films on the big screen in magnificent theaters.

On June 2, you can catch Alfred Hitchcock’s famed murder-mystery Strangers on a Train (1951) at the Million Dollar Theater (307 S. Broadway, Los Angeles). Built in 1918 by Grauman, the venue attained its name because it was constructed to the tune of one million dollars, a staggering sum at that time. The elaborate baroque theater was the first movie temple in Los Angeles.

The Orpheum (842 S. Broadway, Los Angeles) screens George Lucas’ American Graffiti (1973) and a silent, black and white version of Peter Pan (1924) on June 9 and June 30, respectively. Built in 1926, it is one of the few theaters on Broadway that has been preserved. It has been open for over 70 years and still maintains its gilded ceilings, crystal chandeliers and grand, Titanic-style staircase.

The Orpheum’s organ provided music for silent movies and vaudeville acts in the 1920s. In the 1930s and ’40s, the venue was host to live entertainment by artists like Bob Hope, Bing Crosby, the Marx Brothers and Duke Ellington. It is one of the few original theaters that is still open and currently shows new movies in English.

Finally, Dustin Hoffman’s breakthrough film, The Graduate (1967), can be seen on June 16 at the Los Angeles Theatre (615 S. Broadway, Los Angeles). Famed for the enormous fountain in the lobby and its emulation of the French baroque style of Louis XIV, the Los Angeles Theatre was built in 1931 and was kept in good condition through the generosity of Charlie Chaplin so that he could have the premiere of his film City Lights, which has become his greatest achievement.

The Los Angeles Theatre is currently closed, and its spectacular interior is doomed for cobwebs. However, Last Remaining Seats is making it possible for anyone to experience these theaters as they were in their heyday: bustling, lavish and designed for the purpose of being used.