Russell Brand: Art imitates life in Get Him to the Greek. 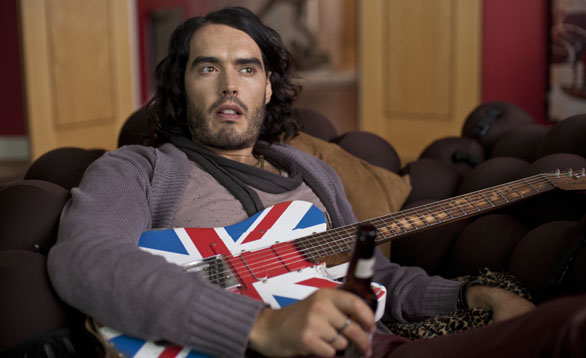 Russell Brand as rocker Aldous Snow in Get Him to the Greek
(Credit: Glen Wilson)

Russell Brand is the latest British export to gain notoriety in Hollywood. Along the way, he has pissed off a few folks and developed quite a reputation.

The always flamboyantly dressed comedian, actor, writer, activist and radio personality is uncensored and sometimes shockingly inappropriate, but it’s a reputation he has learned to live with.

“I’m a narcissist, and I recognize that the self is going to dissipate into nothing if you take it too seriously,” he jokes.

In Get Him to the Greek, Brand plays a rock star with a penchant for drugs, alcohol and bad behavior and was the perfect find for the Judd Apatow-produced project.

“Russell is an incredibly funny, remarkable, charming man,” explains Apatow, “and the character he plays is actually a toned down version of him.”

Directed by Nicholas Stoller (Forgetting Sarah Marshall), Greek is the story of a young record company executive (Jonah Hill) who has three days to drag an uncooperative rock legend, Aldous Snow (Brand), to the famous Greek Theatre in Los Angeles for a comeback concert. Snow is a brilliant musician with a string of hits, but due to a bad breakup with singer Jackie Q (Rose Byrne), he’s fallen off the wagon and is in a nihilistic downward spiral.

“He’s not just a straightforward obnoxious twerp. There’s a sort of sweetness and vulnerability to his self-destruction and self-entitlement,” claims the actor who cemented his fame in the United States when he hosted the MTV Video Music Awards in 2009.

While there’s no one with his style and swagger better suited to portray a rock god, Brand, a recovering alcoholic and former drug addict, admits there were several parts in Greek that were rather uncomfortable to play.

“I went to drama school and can pretend to have a different voice and a different head,” he jokes. “All these things are not hard and are possible. Being a drug addict, I was able to bring authenticity to the role because obviously I have been in that situation loads of times. It’s more the emotional stuff like when you get all angry or shout at people that bothered me. When I shout at someone, I feel really bad and awful in my stomach so I’ve been crippled by some sort of cosmetic empathy. Now I can’t be mean and when I pretend to, I feel really bad. I am pretty nice now out of selfishness,” he adds. “In the words of Morrissey, I can smile about it now, but at the time it was terrible.”

Unshaven and wearing jeans, a T-shirt and an Alexander McQueen chiffon scarf, the comedian, whose breakthrough role was in the 2008’s Forgetting Sarah Marshall, was quite open to revisiting one of his favorite characters.

“It’s very flattering that Aldous Snow’s been given life beyond the initial joy of playing him in Forgetting Sarah Marshall, and I think the reasons that character resonated, at least with Nick and Judd, is that in this celebrity-obsessed age, Aldous was an unusual take on celebrity,” he continues.

Talented, affable with an eclectic style of humor, Brand’s quite the verbal comedian and has come a long way from a modest upbringing in Essex, a county north east of London. “As I remember, I used to be a penniless junkie. Now I am not, and instead of dying I’ve gone on and f**** everyone and made loads of money. Something is going right and I am happy with it. I’m getting some good enjoyment and feel like I am expressing myself. There are compromises and you have to trust other people, and I generally like doing that,” adds Brand.

With several films in production, including a forthcoming remake of Dudley Moore’s 1981 comedy Arthur and a sequel to his bestselling autobiography, My Booky Wook, in progress, Brand is an unstoppable machine.

“I’ve written another book that’s 85,000 words that’s coming out soon. I shot lots of films also. There’s one where I am the Easter Bunny called Hop, and it comes out next year. There’s Despicable Me, The Tempest, which I have done with Helen Mirren, and then I am making a film, which Adam Sandler is producing, where I play a con man posing as a priest called Bad Father. So I have all sorts of different things coming up. Basically, things are definitely all right,” says Brand.

Get Him to the Greek releases in theaters June 4.
Article posted on 6/2/2010
This article has been viewed 2374 times.