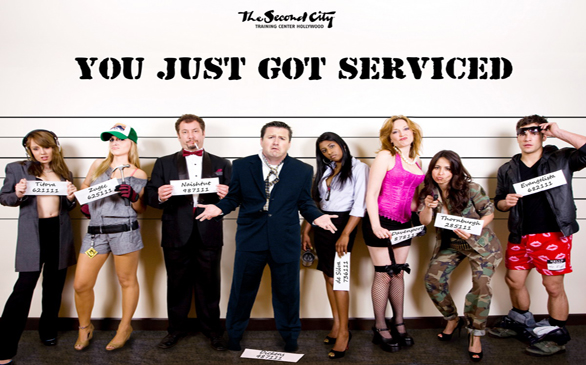 It must be pretty nerve-wracking for some people to hold a mic and get wild, crazy and hilariously entertaining in front of a full house, but not for these guys and gals in the comedy sketch titled, “You Just Got Serviced.” These performers sure know how to put on a show that’s LOL funny.The cast includes Jill Davenport, Angela de Silva, Matt Dickens, Tony Evangelista, Michael Naishtut, Yvonne Thornburgh, Lana Titova and Dina Zugec. Doug Morency brilliantly directs complemented by first-rate musical direction by Michael Pollock.Not to give much away, but the comedy troupe jokes about a variety of topics ranging from Twilight to grocery shopping to convalescent homes.

“I drove all the way from Northern California to watch it, and it was pretty damn good,” says spectator Laura Pereira. “I liked how they’re making a joke of what’s out there today.”The show involves a lot of music, which is pretty ballsy for a comedy. There are three musical numbers, and the solid cast nails them all.

“From week to week, it’s good,” says stage manager Lisa Curry. “Dialogue-wise, they change it up. You can tell they’re really comfortable up there on the stage.”

Comedy is meant to be enjoyed with a group of people, and this theater seats more than 40, so that’s covered. If you’re going solo or with friends, it really doesn’t matter, just get a ticket ($10) and you’ll be sure to get your money’s worth. Period.