The Music: Just Want Their Music to Be Heard 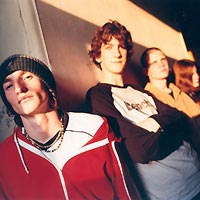 Robert Harvey, the nineteen-year-old lead singer of the new British sensation The Music, was supposed to be a gardener. Well, at least according to a professional assessment test that he took while he was a student in Leeds, England.

"It’s just a bloody machine. It’s not real. It’s just some machine that someone put together that’s meant to tell people what they’re going to do when they get older by what kind of things they like," Harvey says in a phone interview from Australia.

Dismissing his vocational call, Harvey decided to try his hand in music after years of living a boring routine life in a small town. "There’s not much to do there. You play football there. Most of the time, I just go around to one of [my] mate’s house with a few beers and just chill. …and just talk about different mad theories and just laugh at life, really."

Leeds not only lacked a social scene, but a serious music scene as well. Harvey says he never grew up listening to music and never showed a real interest in it until the year that he received a guitar for his birthday.

Forming a band with his long time mates and calling themselves The Music, the four members, all nineteen to 20 years of age, began to quickly garner considerable media attention throughout England )Radio 1 declared them "the best unsigned band in Britain"). They received lavish praise for their hard rock, psychedelic and hypnotic trance sounds and drew favorable comparisons to the sounds of Led Zeppelin, the Chemical Brothers and Jane’s Addiction. The band also soon found themselves supporting such major acts as Coldplay, Oasis and the Charlatans on tour.

The success of their radio single, "Take the Long Road and Walk It," a gritty, power-tripping rock track, also generated major buzz for the band’s self-titled debut album, which entered the British charts at #4. (the album was released in the States by Capitol Records on February 11). It’s no surprise that after the band’s immediate success in England, Harvey and the boys decided to take advantage of new and better opportunities in other parts of the globe.

"I started making music because I enjoyed it, and then someone said you could go around the world and see different places and still play music. So, I thought yeah, it sounds good to me."

Unfazed by the glitz and glamour that fame has to offer, Harvey says his band is only interested in playing good music. He seems especially confident that Americans will welcome his band after they performed for a sold-out crowd at the Troubadour last November.

"I think real live music attracts people in America because any good band in America has to be able to play live because it’s such a big country. In England, you can get away with being just a bad band."

Harvey doesn’t worry too much though if his album doesn’t appeal to everyone. "It can be as popular or as unpopular as it wants it to be. If people buy it, it’s great. But if people don’t, I’m still going to be the same person."

For now, Harvey is content writing music and performing with his mates, but he hasn’t completely ruled out becoming a gardener either.

"I can see myself doing it when I get a house later on."